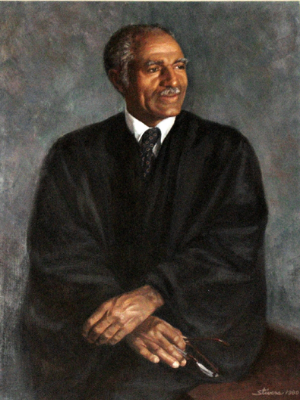 William B. Bryant served on the United States District Court for the District of Columbia beginning in 1965, when he was appointed by President Lyndon Johnson, until his death in 2005, and as Chief Judge from 1977 to 1981.

For more than 20 years, Judge Bryant taught trial practice at Howard University Law School. As a judge he presided over many landmark cases, including Campbell v. McGruder (constitutional challenge to the conditions at the D.C. Jail), Dellums v. Powell (challenge to constitutionality of arrest of individuals protesting the Vietnam War), Hodgson v. United Mine Workers (overturning the election of President of the United Mine Workers), and several high-profile, political cases.

Prior to being appointed to the federal bench, Judge Bryant was a prominent criminal lawyer at the law firm of Houston, Bryant and Gardner in Washington, D.C. While in private practice, Judge Bryant litigated a number of high profile criminal cases, including the landmark case of Mallory v. United States, in which the U.S. Supreme Court overturned a criminal conviction on the ground that the defendant’s confession was obtained unlawfully.

After law school, Judge Bryant served as a research assistant to Ralph Bunche on the famous study on blacks in America, An American Dilemma: The Negro Problem and Modern Democracy, and in the Army during World War II, rising to the rank of lieutenant colonel. From 1951 to 1954 he was an Assistant U.S. Attorney. Judge Bryant was born in Wetumpka, Alabama, but lived in Washington, D.C. from the age of one. He graduated from Howard University and Howard University Law School.