History of the Courts Publications 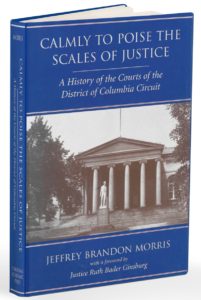 Calmly to Poise the Scales of Justice:
A History of the Courts of the District of Columbia Circuit

Discover the history of how the Court of Appeals became the chief tribunal for administrative law and where Presidents look when appointing Supreme Court justices, and why the District Court became principal venue for overseeing the federal government’s executive branch.

District Court Judge Mathew F. McGuire produced a labor of love in 1976, which he called an “anecdotal history” of the District Court. According to the preface, this is “not a dry recording of detailed minutiae” but rather a readable and exciting story of “the human drama of court trial.”

See pictures of the early chief judges and courthouses, and original documents written by by those who helped shape our legal system. Read stories that went down in infamy, like that of Mary Surrant and her part in conspiracy of John Wilkes Booths’ assassination of President Abraham Lincoln.

Another history sheds a light on the Court of Appeals. It was written and published in 1976 with the assistance of the Young Lawyers Section of the Bar Association of the District of Columbia.

Read how in 1893 the first case ever before the Court of Appeals, Bush v. District of Columbia, began a tradition of the court that the first decision was not unanimous,  or how in 1923, Justice Van Orsdel wrote the standard assessing the admissibility of polygraph testimony and expert scientific evidence in Frye v. United States.

The Contribution of the D.C. Circuit
to Administrative Law

The 1987 program that examined the special role and contribution the D.C. Circuit has made to the development of administrative law with keynote by Judge Patricia Wald and contributors Professor Jeremy Rabkin, Lloyd Cutler and Paul Verkuil.

View the Timeline of the Courts’ History
Page load link