The Oral History of Aubrey Robinson 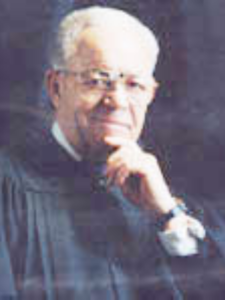 Growing up as a high school musician and track star in New Jersey; serving in World War II; starting his own law firm in the District; and successfully attacking segregation in a Supreme Court case (five years prior to Brown) and at the federal courthouse: Aubrey Robinson had a remarkable life even before becoming a federal judge and, ultimately, Chief Judge of the U.S. District Court for the District of Columbia.

In his oral history, Judge Robinson offered his reflections on his famous trials, his manner of running a courtroom, and his views on prominent attorneys who had appeared before him.

Readers of his oral history might find this fact most revealing of long-gone times: Judge Robinson was informed that he was going to be nominated by President Johnson to the federal bench only one day in advance; and he filled out all the necessary application paperwork that same day during his lunch break. William F. Causey, a Washington civil litigator who has also held various government and teaching positions, summarizes Judge Robinson’s oral history.