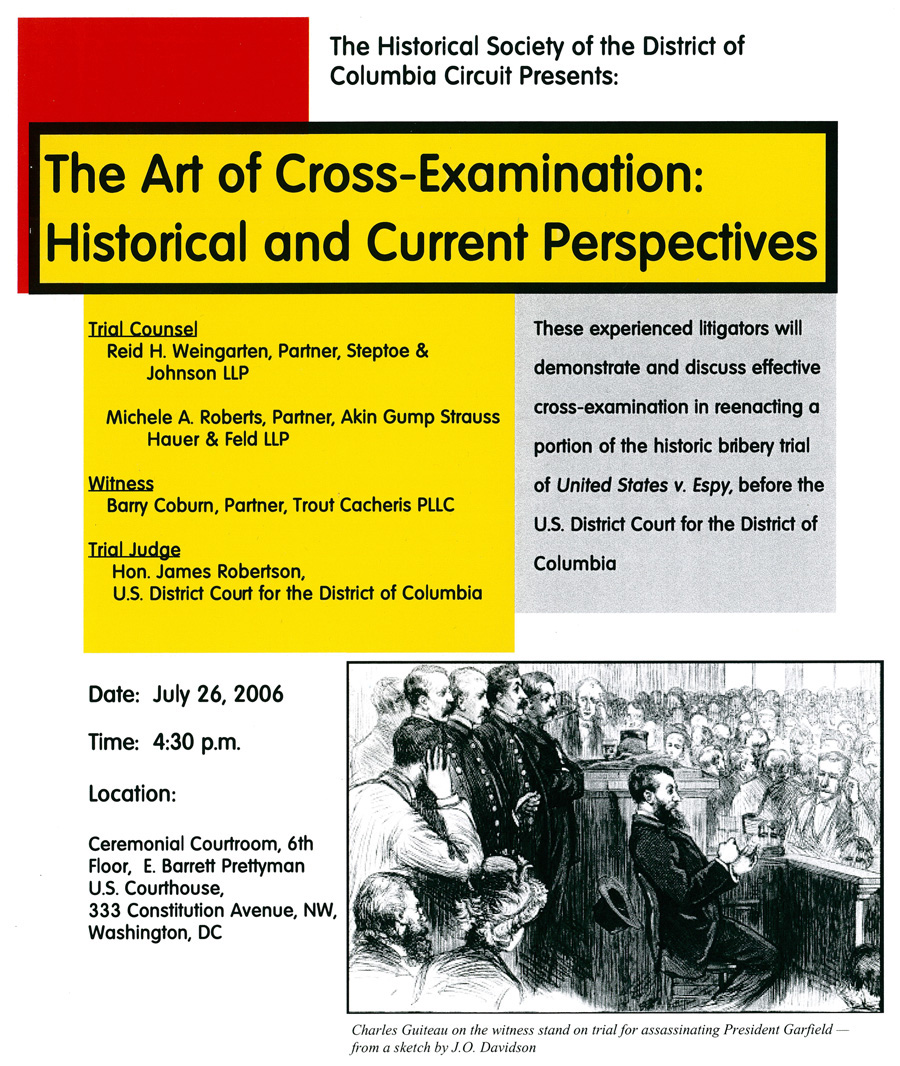 On July 26, 2006, the Historical Society staged a reenactment of the cross examination of a government witness from the Independent Counsel prosecution of former Secretary of Agriculture, Michael Espy.

The Honorable James Robertson presided over this unique program and moderated a discussion among the participants afterward on the art of cross examination and the unusual challenges presented by the Espy trial.

The Ceremonial Courtroom was packed with an audience that included numerous judges and prominent members of the Bar along with many summer associates and law clerks.

Barry Coburn, a partner with Trout, Cacheris PLLC, played the witness, Richard Douglas, a former executive of agricultural corporation Sun-Diamond Growers. Coburn was very familiar with the facts of the case, having served on the Espy trial team while working for the Office of Independent Counsel.

Reid Weingarten, head of the White Collar Criminal Defense practice at Steptoe and Johnson, and Michele Roberts, a partner with Akin Gump Strauss Hauer & Feld, took turns demonstrating the cross examination and serving as government counsel for purposes of objections during the other’s cross.

Weingarten opened his cross of Douglas by eliciting many sympathetic highlights of Espy’s career and personal history. To defeat the bribery charges, Weingarten had Douglas admit that the gifts he provided Espy were given in friendship and not in exchange for official acts.

Though the cross examination was mostly friendly, Weingarten forced Douglas to admit that he would lie to protect his own interests, an important point to help defeat some of the testimony that would have damaged Espy.

Roberts then demonstrated a different approach, mostly using Douglas to paint the Independent Counsel as the bad guy. Displaying the physical nature of effective cross, Roberts pointed repeatedly at Weingarten, who had switched roles to play the Independent Counsel, asking whether “that man” had singled Douglas out for persecution and scrutinized every aspect of his life and career.

Douglas agreed wholeheartedly, which of course is atypical for a witness who was supposed to be cooperating with the government, but proved true in this unusual prosecution. As Roberts later explained, these points supported the defense theory that the government had overcharged the case.

Judge Robertson, who presided over a related case prosecuted in District Court, began the discussion by asking questions of the participants drawn from the reenactment. Coburn described the facts of the direct examination and the cross from the actual case, offering fascinating commentary on the obvious antipathy between Independent Counsel Donald Smaltz and witness Douglas.

One of the most significant points to emerge from the lively discussion was the tendency of Independent Counsel investigations to venture too far. Weingarten, who defended Espy at trial, expressed his view that the Espy case should have never been brought. President Clinton fired Espy after learning about his conduct, which should have ended the matter, according to Weingarten.

Coburn offered a slightly different view, suggesting that the prosecution might have turned out differently had the investigation remained narrowly focused on violations that would not have made the prosecution look so overzealous.

All agreed, however, that the case illustrated some of the inherent problems with the Independent Counsel statute, which may help explain why Congress has ultimately allowed the statute to lapse.