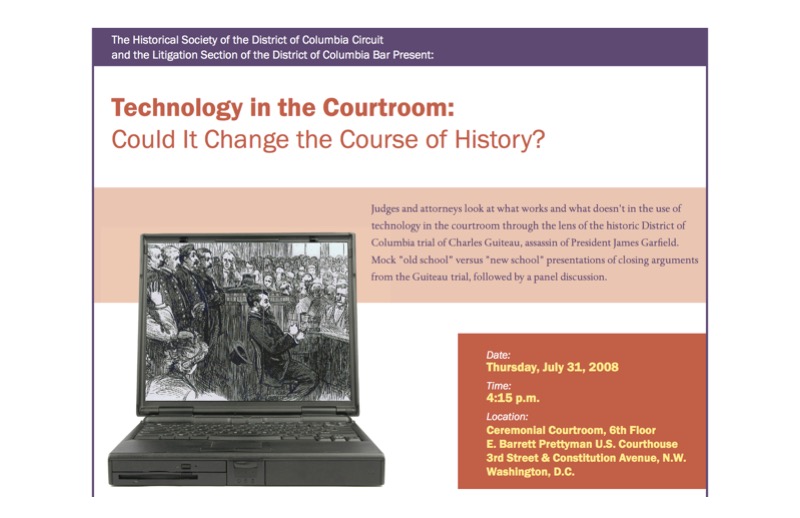 On July 31, 2008, the Historical Society sponsored “Technology in the Courtroom: Could it Change the Course of History?”

The program explored the relative advantages and disadvantages of the use of technology to present evidence and arguments in a jury trial.

As a catalyst for discussion of the issues, two mock closing arguments were presented from the historic District of Columbia trial of Charles Guiteau, the assassin of President James Garfield.

An overview of the historic setting of the 1881-1882 trial was first provided by Suzanne M. Woods, Esq., professor of history at St. Albans School in the District of Columbia. David Kendall of Williams & Connolly then presented a traditional closing argument, without the use of technology, much of it drawn directly from the transcripts of the prosecution’s closing argument in the Guiteau trial.

Judge James Boasberg of the Superior Court of the District of Columbia then followed with a newly-created mock closing argument for the prosecution, which was supported with a variety of technological images and animations.

The mock arguments were followed by a panel discussion moderated by Eva Petko Esber of Williams & Connolly LLP. The panelists for the program were Judges James Robertson and Rosemary M. Collyer of the United States District Court for the District of Columbia, Francis D. Carter of Zuckerman Spaeder LLP, as well as Mr. Kendall and Judge Boasberg.