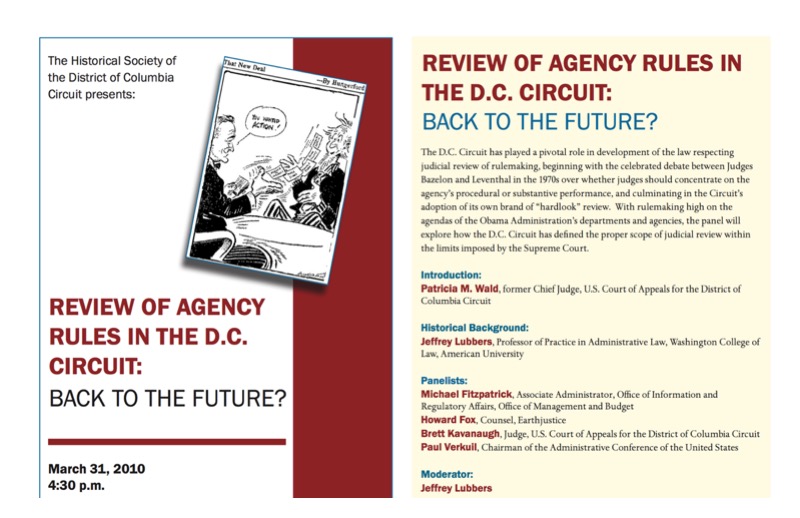 In the 1970 influential judges on the D.C. Circuit engaged in a well-publicized debate about the appropriate scope of judicial review of federal agency rulemaking.

On the other hand, Judges Leventhal and Wright believed that mandating additional procedures, beyond those required in the Administrative Procedure Act (APA), would lead to over-proceduralization and would ultimately slow down the rulemaking process.

They believed that, instead, judges should examine and try to understand the technical matters at issue in the rulemaking in order to determine whether the agency had exercised reasoned discretion. This review, conducted under the arbitrary-and-capricious test of the APA, was labeled “hard look” a term coined by Judge Leventhal.

This debate was ended by the Supreme Court’s Vermont Yankee decision, in which a decision written by Judge Bazelon was reversed on the grounds that this sort of “Monday-morning quarterbacking” the rulemaking process would cause agencies to err on the side of formal procedures and that “all the inherent advantages of informal rulemaking would be totally lost.

But hard look review of agency fact finding and policy choice under the arbitrary and capricious test survived, spurred on by the Supreme Court substantive review in the 1983 State Farm decision.

Today, these debates are being rekindled by academic criticism of the hard look doctrine itself, arguing that it has produced the same sort of slowdown of agency rulemaking. An interesting partial dissent by Judge Brett Kavanaugh in American Radio Relay League, Inc. v. FCC, 524 F.3d 227, 247-48 (D.C. Cir. 2008) takes this position.

On the other hand, the panelists discussed the question, raised by the moderator, whether a relatively stringent arbitrary-and-capricious test might be even more necessary today, given that courts now tend broadly to defer to agency procedural choices and legal interpretations.

The panel discussing these issues included Judge Kavanaugh; Paul Verkuil, a commentator on rulemaking and newly confirmed Chairman of the re-established Administrative Conference of the United States; Howard Fox, Counsel to Earthjustice, an environmental group that often litigates rulemaking cases before the D.C. Circuit; and Michael Fitzpatrick, Associate Administrator, Office of Information and Regulatory Affairs, Office of Management and Budget, the White House office that reviews all significant executive agency rules before they are issued.

Patricia Wald, former Chief Judge of the U.S. Court of Appeals for the D.C. Circuit, introduced the panelists, and Professor Jeffrey Lubbers of Washington College of Law, American University, provided some historical background and moderated the discussion.