Recollections of the First Watergate Judge 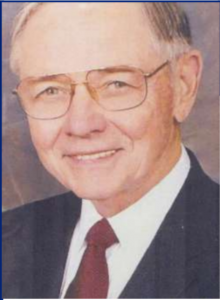 “Breaking into a political party headquarters during a campaign – that obviously was a big matter.”

Judge Belson, now 90 years old and living in Annapolis, recalls when Assistant U.S. Attorney Charles Work arrived to get his signature on a search warrant for the men’s hotel rooms and to ask that their cases be called at the end of that day’s calendar. The Judge admits to having an unusual thought. “I was anxious to see what these gentlemen looked like.”

What they looked like was ordinary, “dressed in casual clothing,” the Judge remembers. He doesn’t think they were handcuffed. He recalls that federal marshals brought the five of them together into the courtroom — number 17 in Building “A” – where the charges would be presented, the last of about 35 cases he would process that day. A local attorney, Joseph Rafferty, Jr., stepped forward to say he would represent all five. It was far from clear how he knew to be there.

We know today that one of the five, Bernard Barker, had asked his wife to contact Douglas Caddy, Howard Hunt’s lawyer, if he hadn’t called home by 3 a.m. (“that might mean we’re in trouble”). Caddy, who was not experienced at criminal law, called Rafferty.

Four of the burglars — the “Miami men” – awaiting their presentment sat to one side, as did James McCord, the security chief of the Nixon reelection campaign who had led them into the Watergate building. Judge Belson recalls that Barker, who appeared to be the leader of the Miami men, said something to them. Afterward, the Judge says, he learned that Barker had said in Spanish, “There is a window behind us. We can probably jump out.” Judge Belson says “a very sharp” marshal, who spoke Spanish, said to them, “You better not do that. It’s sixty feet down to concrete.”

The Judge’s job was to set bail and a date for a preliminary hearing. Principal Assistant U.S. Attorney, Earl Silbert, who spoke for the government, urged that the five be held without bail because of their use of false names, the amount of cash in sequential $100 bills found in their rooms, and the potential that they would flee.

Judge Belson recalls that Barker spoke up. “I want you to know we are not criminals,” said Barker. “We are patriots.” Thinking back to that moment, Judge Belson believes he probably replied, “Well, let’s go ahead with the presentment.” And he adds, “I wasn’t going to take that up. It wasn’t before the court at that point.”

Determining how much bail would deter the suspects from fleeing, Judge Belson turned to one of them, James McCord. The Judge remembers asking him “where do you work?” “I’m retired,” said McCord. “From the U.S. government?” I asked him. “Yes, sir.” “And I said from where in the U.S. government?” He said “CIA.”

Judge Belson still pictures what happened at the mention of the CIA. “A Washington Post reporter who had been sitting in the front row of the spectator section, jumped up and ran out of the room.”

The Judge set McCord’s bond at $25,000. He doesn’t recall the amount for the Miami men, except that it was very high. Says Judge Belson, “They had no connection with the area here, no jobs here. They had every reason to not want to be here.” What sticks in his memory is how quickly McCord’s bond was posted. “He was released right away.”

The proceeding lasted no more than twelve or fourteen minutes, recalls the Judge. “It was an astounding thing,” he says. “I knew that it would be big.”

The following Monday, Superior Court Chief Judge Harold Greene assigned the Watergate case to Judge Belson for “all purposes.” Subsequently, the charges were brought in the U.S. District Court where its Chief Judge, John Sirica, decided to try the case himself.

Fifty years later, Judge Belson shows no disappointment at being left out of most of the history books. Good-naturedly, he recalls being approached by a reporter at a bar meeting who referred to him as the forgotten judge of Watergate.

He is not famous. But he was first.