Read the Oral History of the Honorable Patricia M. Wald 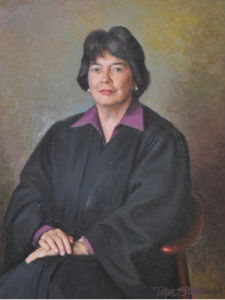 Patricia M. Wald served 20 years on the D.C. Circuit Court (1979-1999), five of them as Chief Judge (1989-1994). She was the first woman to hold those positions. She wrote more than 800 judicial opinions. Following her retirement, she was for two years (1999-2001) a U.S. Judge on the International Criminal Tribunal for the Former Yugoslavia at The Hague. Judge Wald’s 381-page oral history offers a firsthand view of lawyering and judging during the second half of the twentieth century, especially of note because of the unusual nature of her being a woman and having a background in public interest law.

She describes her early years after Yale Law School, including her clerkship with Second Circuit Judge Jerome Frank, stint at Arnold, Fortas & Porter, and period away from practice raising five children. Returning, Judge Wald tells of seven years focused on juvenile justice reform, followed by two years as Assistant Attorney General for Legislative Affairs in the Administration of President Carter.

You can read about the tempestuous proceedings following her nomination to the Court of Appeals. Illustrative, religious leader Bob Jones called her an “instrument of the devil,” which she says turned into a family joke. When reporters asked her young son how that made him feel, he said, “Well, she burns the TV dinners, but otherwise she’s okay.”

Judge Wald speaks in depth about her years as a judge and chief judge, giving the reader a look into both public and in-chambers experiences. She describes the processes she followed in decision-making and writing of opinions. She discusses in depth nine of the then 700 opinions she had written for the Court or in dissent. She describes the basis on which she arrived at the final nine: “The ones I picked were illustrative of two things: both the complexity of some cases, and the technical depth to which judicial review sometimes has to reach in order to deal with the issue.” She added, “A few are in there because they went on to the Supreme Court and involved issues of larger social-political scope.”

Judge Wald had a lifetime marriage with Robert L. (Bob) Wald and, as noted, they had five children, Sarah, Douglas, Frederica, Johanna, and Thomas.