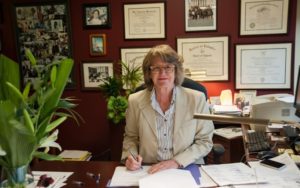 It would be hard to identify anyone in the nation with more hands-on experience in founding, funding, staffing, building, and operating a major law school than Katherine Shelton (“Shelley”) Broderick.  In her oral history, Broderick describes her role in establishing the University of the District of Columbia David A. Clarke School of Law, where she also served as Dean for twenty years.  Previously, Dean Broderick played a leadership role at both the Antioch Law School and the District of Columbia School of Law.  Highlights of her oral history include her discussion of representing indigent, underserved, and sometimes quirky clients in the DC courts, as well as her reflections on working with (and against) a host of DC political luminaries.  Robert N. Gross, himself an educator and historian, conducted Dean Broderick’s oral history and has prepared the attached summary.