The Library of Congress and the D.C. Circuit 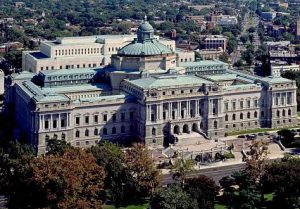 The Library of Congress, which celebrates the 222nd anniversary of its founding on April 24th, 2022, is one of the world’s greatest cultural institutions. Destroyed (along with the U.S. Capitol, in which it was housed) by British troops in 1814, it quickly reconstituted itself through the purchase of Thomas Jefferson’s magnificent personal collection of 6,487 books. Over the years since, it has grown as the nation has grown. It now contains more than 30 million volumes, centered in a stunning Beaux-Arts temple of learning across one street from the rebuilt Capitol, and across another from the Supreme Court building. Although its mission prioritizes, to a certain extent, the needs of Congress, it also serves the people of the United States as the nation’s library.

Within the Library of Congress, the Manuscript Division is a leading national center for the study of American history. It contains over 60 million manuscripts, including the collected papers of 23 presidents (from George Washington to Calvin Coolidge), and 10 chief justices of the Supreme Court. Lower federal court judges who were not subsequently elevated to the Supreme Court are also represented; the Division holds the papers of 25 district court and court of appeals judges who served in various districts during the 20th and 21st centuries.

The bulk of these collections consists of chambers papers, which are considered to be the personal property of the individual judges who generated them. They are particularly valuable sources for historians interested in the operations of the federal government, and for biographers focused on the lives of jurists. The Federal Judicial Center defines these records as “case-related documents, correspondence, and documentation of court administration distinct from the official record of the court” (A Guide to the Preservation of Federal Judges’ Papers, 2nd ed. [2009], p. 3). Unlike most government papers, these items are not acquired by the National Archives (with the exception of the presidential libraries run by the National Archives and Records Administration). Federal judges, or their heirs, are free to donate or otherwise dispose of their chambers papers in any way they wish.

As might be expected, the Library of Congress Manuscript Division has received a number of donations of personal and chambers papers from judges of the District of Columbia Circuit. As of 2017, the Circuit’s judges have given or deposited 45 collections in 22 repositories across the country. The Library of Congress has 17 of these; no other institution has more than two. (Three judges left papers to more than one archive.) The most likely repositories for DCC papers, however, are academic institutions. Sixteen different colleges and universities—including, it is supposed, many alma maters—hold 21 sets of papers from the Circuit.

Many of the D.C. Circuit’s most notable jurists have donated their papers to the Library of Congress. Among them are two Court of Appeals judges subsequently appointed to the United States Supreme Court: Wiley Rutledge and Ruth Bader Ginsburg. Also included among the Library’s holdings are collections given by Charles Fahy, Harold Leventhal, Carl McGowan, E. Barrett Prettyman, Harold M. Stephens, David S. Tatel, and J. Skelly Wright. The U.S. District Court for the District of Columbia is represented by the papers of judges Gerhard Gesell, Harold H. Greene,  John Garrett Penn, and John Sirica.

These collections vary in size and scope, with newer acquisitions tending to be larger. The largest, the Harry T. Edwards Papers, has 737 containers and occupies 295 linear feet of shelf space; it also comes with 13.7 gigabytes of digital files. The Robert Bork collection is a close second: 690 containers and 279 linear feet. The smallest sets were generated by Henry W. Edgerton and George Thomas Washington, two earlier judges. Each of these is housed in a mere eight containers (three linear feet). The Washington papers are also unique in that they contain materials related to his diplomatic duties during World War II and his tenure with the Justice Department, rather than judicial materials.

Writers, journalists, and scholars interested in a wide variety of legal and political topics will find a wealth of materials in the 17 manuscript collections. The papers are especially rich and revealing for many of the most important, and controversial, battles of the second half of the 20th century, from Watergate and the secret Nixon tapes to the “Don’t Ask – Don’t Tell” dispute over gay rights in the military. The story of the Iran-Contra scandal, for example, is enlivened by Judge Gerhard Gesell’s private diary notes, set down his candid observations as the trial of Oliver North was going on. Also, a very recent addition to the Sirica Papers contains a similar group of Watergate diaries and a copy of Nixon’s published memoir, with Judge Sirica’s annotations.

Future growth of the Library’s D.C. Circuit holdings is uncertain. Researchers in legal and judicial history tend to focus on the Supreme Court collections, which are among the most widely used in the Manuscript Division. The files of the other federal court judges are sometimes overlooked, even though the great bulk of work done in the federal judiciary is accomplished in the inferior courts, and even though the District of Columbia Circuit handles many important cases through its unique jurisdiction with regard to the administration of federal government agencies.

There are also practical considerations at work. Although modern judicial files are usually better organized than most other archival acquisitions, they can still be quite voluminous, requiring considerable resources to arrange, catalogue, and preserve. Finding enough shelf space for them on Capitol Hill or in annexes located elsewhere can be problematic. The Library of Congress usually accommodates access-restrictions imposed by manuscript donors, but it is sometimes reluctant, or slow, to acquire and process collections whose opening may be delayed by decades due to the sensitive nature of papers contained therein.

Increasing interest in the Library of Congress’s D.C. Circuit collections could offset these negative factors. The ever-increasing number of high-quality oral histories provided by the circuit’s Historical society—freely accessible over the Internet as well as in print form at the Library’s Manuscript Division, may well spur greater demand for the judges’ papers. Also, the on-line availability of the detailed finding aids has invariably generated increased use of the Division’s collections. With greater demand for judicial collections, one hopes, the Library of Congress will continue to expand its holdings, and thus help to enhance and preserve the history of the District of Columbia Circuit.