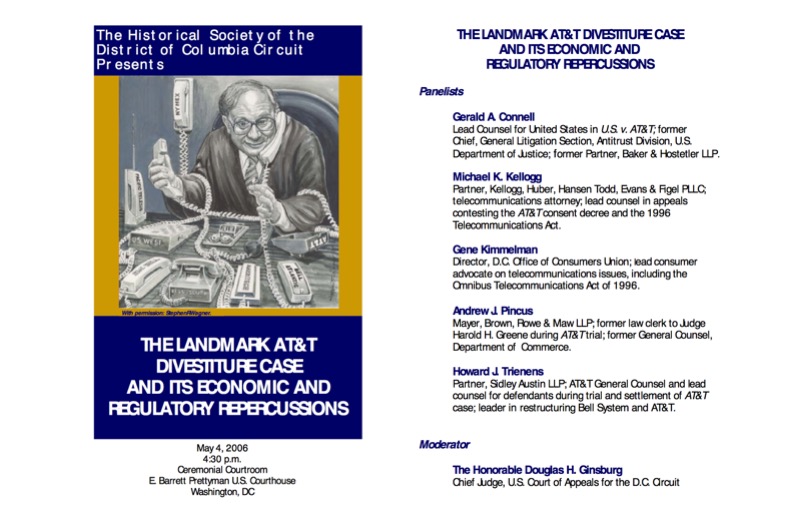 During the panel discussion on the AT&T case, three of the participants in the trial described their involvement in the case. Howard Trienens, the lead counsel for AT&T during the trial, began the discussion with a historical overview of what led to the Justice Department’s lawsuit.

Gerald Connell then shared his perspective as the lead attorney for Justice’s Antitrust Division at the time of the trial, describing his experience of having the full support of Assistant Attorney General Sandy Litvack and the Department to help balance out the far greater number of attorneys and staff employed by AT&T on the case.

Judge Greene’s law clerk during the trial, Andrew Pincus, described Judge Greene as the “engine” that made the trial run smoothly – directing the parties to stipulate facts so that the trial would focus on the disputed issues, and implementing other innovative strategies to keep up the pace.

Chief Judge Ginsburg raised the fascinating history of the Defense Department’s efforts to stop Justice from pursuing the case. He described Assistant Attorney General Bill Baxter – who took over for Litvack as head of the Antitrust Division in 1981 and became the Department’s principal negotiator toward the consent decree – as a model of integrity.

The mention of DOD’s involvement led to insightful comments from one member of the audience, Richard Levine, Director of Policy Planning for the Antitrust Division when the case was being developed and tried. Levine described how a communique from Defense Secretary Caspar Weinberger to Assistant Attorney General Baxter about the case lay neglected in a safe in the Justice Department because it had been marked “secret” by the Defense Department and 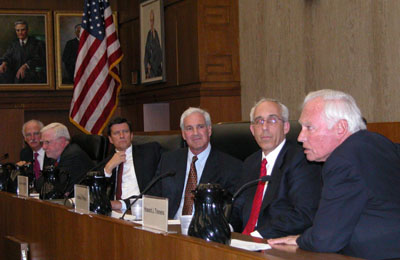 Baxter did not have a clearance when it arrived; yet even after it was uncovered, the communique had little influence on Baxter, who was confident that pursuing the breakup was the right course.

The trial spawned activity on Capitol Hill as well. Gene Kimmelman described the extensive lobbying efforts on behalf of AT&T and how they affected debate in the Senate and the House.

Interestingly, as Kimmelman pointed out, the drive to break up the company was not a populist campaign, as consumers were overall not unhappy with the status quo. Given the uncertainty of these efforts, the company eventually pushed to settle the case.

Trienens suggested that Judge Greene’s handling of the trial was one of the most influential factors that led AT&T to negotiate; convinced that it would lose at trial, the AT&T Board ultimately agreed that a consent decree was the best alternative for the company.

Michael Kellogg described how the industry has evolved since the breakup and the difficulties that plagued the companies and regulators prior to the passage of the 1996 Telecommunications Act. The general consensus of the panel was that overall, the market has benefited from the breakup, and the problems that the Defense Department and others predicted might result have not been realized.

Chief Judge Greene is unfortunately no longer here to add his thoughts, but thanks to the Society’s Oral History Project, he left us with these words on the case: “I’m perfectly content with my own view that the breakup was a good thing. It brought competition into a field where there hadn’t been any competition, and that’s the American way.”

Hear those words for yourself in Judge Greene’s unique voice by visiting his Oral History page on the Society’s website and selecting the sound clip “Reflections on the AT&T Case.” You may also wish to review the transcript of his oral history on the website.