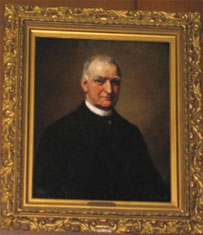 Overall Condition
Portrait is in excellent condition. Frame has some damage on the bottom.