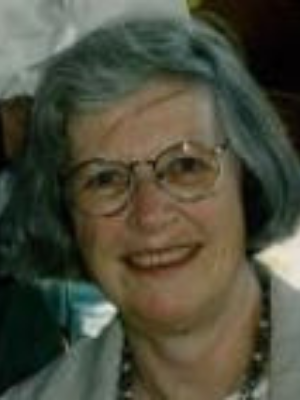 Based on Harriet S. Shapiro’s Oral History for the D.C. Circuit Historical Society

Hired in 1972 as the first female attorney in the office of the United States Solicitor General, Harriet Shapiro helped lead the way for her female law contemporaries and future generations of female lawyers. A strong and intelligent woman, Shapiro’s success is entirely her own, and her personality and drive come through in her recounting of her life story. But a notable pattern in Shapiro’s story is the presence of empowered women in her life, and it is worth examining how these female influences and the general gender climate in which she lived helped shape Shapiro’s confidence, wherewithal, and ability to eventually achieve such a groundbreaking position.

From the beginning, Shapiro found strong female role models in her family lore. Shapiro’s father was an accomplished geneticist and genealogist, who carefully maintained a family history where stories of men and women alike were detailed with as much information as possible. Young Shapiro was always interested by the stories found within its pages. Her favorite story was that of Penelope von Princis, an ancestor captured and “‘bound to a tree, disemboweled, and left for dead. She managed to free herself and replace her innards,’” and she would go on to have three children and live another twenty years.

Shapiro’s more immediate family was no exception. Her maternal grandmother was notoriously a “fiery” woman with strong opinions, and “despite feeling that men were more important than women,” she valued education and opportunities for all of her children, regardless of gender. Each of her four surviving daughters – including Shapiro’s mother Phoebe – went to university, which was quite rare for women in the 1910s. While Shapiro’s mother did not pursue a full-time career, she was well-educated – even meeting Shapiro’s father as an assistant in a science laboratory – and was a self-taught carpenter, breaking the time’s traditional gender norms.

She was also an avid Democrat and committed member of the League of Women Voters, instilling an early interest in law and politics in Shapiro and her siblings. Her mother’s best friend, Rebecca Lancefield, whose family Shapiro summered with, was also an extremely important role model. Lancefield was “a serious scientist,” a career-minded bacteriologist at the Rockefeller Institute, who did important early work on staphylococcus. Shapiro eventually chose her university “mostly because ‘Becca [Lancefield] had gone there.” This familial atmosphere of equality is best evidenced by Shapiro’s own memories that “it was perfectly clear that [she] was as smart as [her] brothers. [She didn’t] think that this notion of a woman’s place really ever was emphasized.” As a result of this attitude, it was considered a given that Shapiro would continue her education after high school just like her brothers, and this expectation made continuing on her eventual career path concretely possible.

Shapiro’s college years were spent at Wellesley College, an all-girls university considered to be part of the Seven Sisters, a group of schools established as a female counterpart to the all-male Ivy League. With a strong female role model as the college president – Mildred McAfee Horton, the first director of the Women Accepted for Volunteer Emergency Service during World War II – academics were prioritized and female empowerment was encouraged.

Wellesley was certainly no finishing school: in fact, Shapiro recalls that when the movie “Mona Lisa’s Smile” presented an image of Wellesley as such, “all the Wellesley alums were outraged at this. The notion that [Wellesley was] a finishing school or that [they] didn’t have these high intellectual standards from the get-go. Oh! Outrageous! How did Wellesley permit them to shoot this movie?” In this intellectual all-female environment, the relatively shy Shapiro, who had never dated – she vividly remembered college-hosted mixers as “agony” – and was uncomfortable around boys, flourished.

As a result of these four years of academic success, Shapiro built up the confidence and conviction to apply for an entry-level job in the ‘real world,’ which would serve as the tipping point in her decision to go to law school. As a Social Security claims examiner in Santa Rosa, California, Shapiro met many interesting people, but one woman had a particular effect on her life’s path. Ruth Bates, a small-town lawyer, became a role model for Shapiro as the two worked together to establish a League of Women Voters chapter in the city and “promised that when [Shapiro] got out of law school, [she] could come and work with her.” Though Shapiro balked at the networking nature of working in a small town, the presence and continued success as a working female lawyer made Shapiro think, “if Ruth can do it, I can do it.”

Shapiro’s decision to go to law school came at an opportune time. With the first generation of female lawyers newly minted, Shapiro reached law school in 1952 “just as the barriers to women were starting to crumble.” Though schools such as Harvard and Yale were only just starting to accept women, Columbia Law School had accepted female students for 25 years, and Shapiro enjoyed a relatively smooth experience there. While there were occasional sexist comments and “Ladies’ Days,” where women would be pitted solely against each other in specific freshman classes, the overall atmosphere was not unfriendly.

Women made up only 10% of Shapiro’s 200-person class, but the female students were generally respected for their abilities within lectures and study groups and “most of the teachers were completely unbiased. A few of them would say every once in a while things like, ‘I have a great story that I could tell you if it weren’t for women in the class.’ But mostly not.” Shapiro learned to respond to these professors with a simple “what the hell, it’s their problem, not mine,” an important lesson she would come to appreciate later in her career.

In this environment, Shapiro succeeded brilliantly in her first-year classes, and she was asked to join the school Law Review at the beginning of her second year. This invitation and her hard work would lead to her first groundbreaking moment as a female lawyer: she became just the second woman at Columbia to serve as editor-in-chief of the Law Review during her final year. Working alongside a mostly male editorial staff in a position of leadership, Shapiro learned quickly to assert herself and lead in a male-dominated workspace, a quality that would prove essential in her later position as the first female attorney in the Solicitor General’s office.

It is worth noting that Shapiro’s emergence onto the law scene came at a time where women were accepted, albeit grudgingly, rather than barred from the profession. The generations immediately preceding Shapiro’s – the women pursuing law from the 1920s through the 1950s – were often discriminated against, carrying chips on their shoulders that screamed of difficult lives. Qualified female graduates in these years could graduate at the top of their classes, apply to twenty firms, and yet be accepted at none, being told at every turn that “‘we want a man.’”1

The onset of the Great Depression led to women being scolded for even applying for jobs, “asked how [they] could possibly expect to be considered when there were men out there with families to support.”2 Though new positions opened for women as a result of army enlistments during World War II, female lawyers were expected to only take on temporary positions and vacate their jobs once the men returned home from the war. The few women who did find permanent jobs were paid lower starting salaries, segregated from men in both the office and the lunchroom, and given less lucrative assignments and promotions.3

But the struggles of these women helped pave the way for the acceptance of a new generation. Shapiro described the mindset of her contemporaries as a sharp contrast to the previous one, remarking that “there was a t-shirt worn by a woman in the Justice Department gym that [she] always liked. It said on the front, ‘To succeed, a woman has to be twice as smart as a man,’ and on the back it said, ‘Fortunately that’s not hard…’ and that was kind of [the] attitude. ‘Okay, so you hold me to a higher standard? So what, I can do that.’” In this atmosphere, groundbreaking achievements suddenly took on a new air of possibility.

This defiant attitude appears to have helped Shapiro – and perhaps other female lawyers of her era – shrug off the discomforts and overcome the obstacles they did encounter. At the beginning of her career in the Solicitor General’s office, Shapiro was faced with a secretary who refused to work for her because she was a woman. Instead of taking offense, her reaction was a simple “so what?… I didn’t want her working for me if she had a problem with it, for heaven sakes.” This strength and persistence was exhibited in both the choice to ignore inherent sexism and the choice to protest it; Shapiro recounts that on official Solicitor General brief confirmations, “the blank on the stamp for the signature was [always] preceded by ‘Mister.’ It never bothered me. I just signed it, but about halfway through the time when I was there, one of the other women in the Office got very annoyed and demanded a new stamp. So they made a new stamp that just said, ‘M.’”

Tackling the law field – and the world – with her “old attitude from [her] elementary school days of, ‘Sure, I’m different, but I’m better at this than most, so my difference is nothing to be ashamed of,’” Harriet Shapiro was able to pursue her career and rise to become the first female attorney working in the Solicitor General’s Office on the wings of the women who came before and supported her.

I grew up in an academic family, the middle child and only girl of three siblings. Father was a key figure in early genetics research. In 1928, the year of my birth, we moved to Pasadena, California, where Father helped establish the Biology Department at Caltech. We spent each summer in Woods Hole on Cape Cod.

I went to Wellesley College in Massachusetts, graduating in 1950. After two years as a claims examiner for the Social Security Administration in northern California (Santa Rosa), I returned East for Law School at Columbia University, where in my third year I become the second ever female editor-in-chief of the Columbia Law Review. Howard was also on the Review; we were married in 1954, just before our third year at the law school.

After graduation, we moved to Washington, where I worked for the Atomic Energy Commission. When it moved to Germantown, I went to the Justice Department until our first son was born. Like a good 50’s mother, I stayed home to take care of him. I lasted at this endeavor until our second son got old enough to be active, while his brother was still too young to recognize him as the ally that he later became. In those early years, I was permanently exhausted, and pining for adult conversation when Howard came home, tired from talking all day. We recognized it was time for me to go back to work, so I returned part time to the Atomic Energy Commission, eventually serving as assistant to a Commissioner.

In 1972, the lawyers in the Office of the Solicitor General (the Justice Department unit representing the government in the Supreme Court) persuaded the Solicitor General that it was time to hire a woman. Howard encouraged me to apply, though it was a full time job. I became the first woman attorney in the Office. It was a dream job, both challenging and satisfying. The 15 oral arguments in the Supreme Court were the least of it. In 2001, I decided I wanted some time for myself, and retired I have been happily rug hooking & reading ever since.

Courtesy of the Shapiro Family 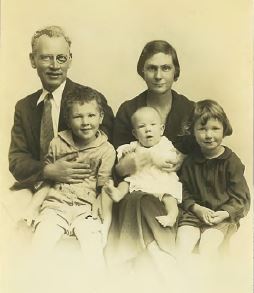 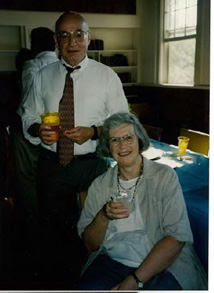 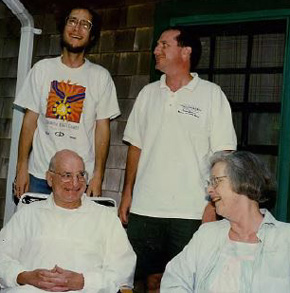 Harriet and Howard with sons Charles and Alfred Shapiro