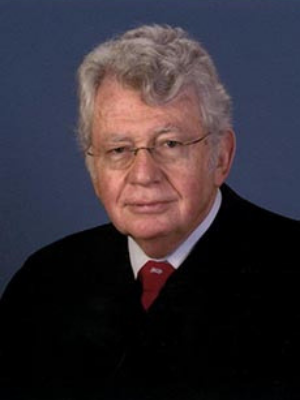 by Steven A. Steinbach

Based on David B. Sentelle’s Oral History for the D.C. Circuit Historical Society

How did a self-described “country lawyer” from western North Carolina, who grew up trapping muskrats and frequenting hog killings, end up serving –for thirty-plus years (and still counting) – on the United States Court of Appeals for the District of Columbia Circuit? And how did he become a regular poker partner of the (former) Chief Justice of the United States?

The answers to these – and a host of even more significant questions – can be found in the engrossing oral history of David B. Sentelle, who served as Chief Judge of the D.C. Circuit from 2008 until 2013. Over the course of seven lengthy interviews, Judge Sentelle describes his remarkable career and his most significant legal and judicial accomplishments. The interviews, which spanned from 2003 through 2014, were conducted for the Historical Society of the District of Columbia Circuit by David Frederick of the firm of Kellogg, Hansen, Todd, Figel & Frederick.

“It’s been a very different life than the one I planned,” says Judge Sentelle, “But it’s been a damned good one. I’ve been very blessed and thankful for it.”

In his oral history, Judge Sentelle chronicles his childhood (besides muskrat trapping, he immersed himself in the Bible and the works of Shakespeare and Thomas Wolfe) – his education (both college and law degrees from the University of North Carolina) – his early involvement in Republican politics (including campaigning for Barry Goldwater in 1964) – and his service as an Assistant United States Attorney (“it’s almost sinful to take money for having that much fun; I can’t imagine a better experience professionally”).

After serving for several years as a state court trial judge (beginning at age 31), Judge Sentelle subsequently formed his own law firm, where he practiced for nearly a decade, specializing in white collar criminal defense work. He purposely cultivated his “mountain accent” in order to appeal to ordinary jurors.

In 1985, President Reagan nominated Judge Sentelle to the federal bench for the Western District of North Carolina. Two years later, he was elevated to the Court of Appeals for the D.C. Circuit following a Senate vote of 87-0. For a time, though, his confirmation to the appellate court was delayed when his membership in the Masonic Lodge, from which he refused to disassociate himself, became a political issue.

In the course of his oral history, Judge Sentelle describes the day-to-day work of an appellate judge, particularly in a court whose docket is chock full of  administrative law cases (“hell, it’s law and I’ve learned a lot of other kinds of law and I’ll learn this kind of law,” he said to himself at the outset). He identifies the qualities of a good judge (patience, fairness, collegiality, and intelligence) and the attributes of an effective oral advocate (diligence, thoughtfulness, and – most of all – preparation).

Along the way, he reminisces about his many judicial colleagues and some of his more significant cases and opinions, including: the Oliver North and John Poindexter prosecutions; the habeas appeals from Guantanamo; the Microsoft antitrust litigation; and the Noel Canning (separation of powers) controversy. His reflections, always interesting and insightful, are often humorous and self-deprecating. He is particularly passionate about the importance of fostering collegiality among his judicial colleagues: “It’s much harder to write a spiteful dissent if you like the guy that wrote the majority and if you know you’re going to have interactions.”

For fourteen years of his tenure on the Court of Appeals, Judge Sentelle also served as the Presiding Judge of the Special Division for the Purpose of Appointing Independent Counsels. It was in this capacity that he and his colleagues appointed former D.C. Circuit Judge Kenneth Starr to head the investigation of President Clinton. Starr’s appointment was not without controversy, as it occurred shortly after Judge Sentelle met for lunch on the Hill with two of his friends, who happened to be Republican Senators. Says Judge Sentelle: “There is no vast right-wing conspiracy and if there was one, it wouldn’t meet in the Senate dining room.”

Despite taking senior status in 2013, Judge Sentelle has no intention of slowing down: “I accepted a life sentence, and I think I’ll serve it out as long as the Lord gives me strength to keep doing this.”