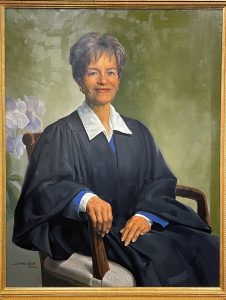 Simmie Knox was born on August 18, 1935, in Aliceville, Alabama. As a young child he loved to make little sketches. Upon graduating from high school, Mr. Know spent several years in the military, and then attended Delaware State College as a biology major. He did some wonderful sketch of microorganisms and a professor recommended that he take art classes.

After completing his studies at the University of Delaware in 1967, Knox enrolled at the Tyler School of Art at Temple University where he earned a bachelor and master’s degrees in fine arts. His portrait of abolitionist Fredrick Douglas in 1976 is part of the collection at the Smithsonian Institution. In addition, he held many teaching positions, including being an instructor at Duke Ellington School of the Arts in Washington, D.C. from 1975 to 1980. When I saw his extraordinary portrait of Honorable Spottswood William Robinson III of this Court, I knew I would like him to paint my portrait. He painted my official portrait as Chief Judge of the District of Columbia Court of Appeals and now as a judge on the U.S. Court of Appeals for the District of Columbia Circuit.