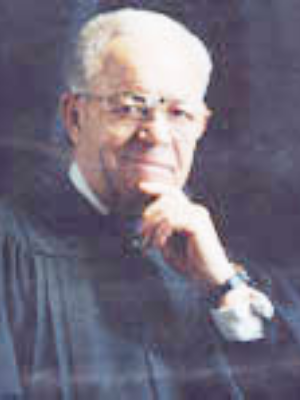 Born on March 30, 1922, in Madison, New Jersey, of African American descent, Judge Robinson attended one of the few integrated public school systems in the country at the time. An avid reader and excellent student, Judge Robinson was president of his high school Student Council, was on the track team, played the violin and clarinet, and as a member of the debate society, was given the honor of publicly reading the Gettysburg Address on Memorial Day. After declining a full four-year tuition scholarship to New York University, Judge Robinson chose to attend Cornell University, where he excelled academically.

After graduation, Judge Robinson enrolled in Cornell Law School, only to have his legal education interrupted by World War II. He was trained in antiaircraft artillery in various military locations in the South and for the first time experienced overt racial discrimination. He was about to be sent to the Pacific when the war ended. He returned to Cornell to finish law school and graduated in 1947. Judge Robinson’s connection to Cornell continued as he later served for nine years as a member of the Cornell Board of Trustees.

After a one-year clerkship with a small Newark law firm, Judge Robinson “took a chance” and came to the District of Columbia to start a small practice with Charles Duncan and Frank Reeves, two lawyers who later became notable members of the District of Columbia Bar. The firm handled an assortment of civil cases, probate matters, and a few criminal cases. One of the firm’s most notable cases was one in which it represented an African American in the Supreme Court of the United States who had been refused service in a railway dining car. The Supreme Court ruled in Henderson v. The Southern Railway (1949) that the railroad unlawfully discriminated on account of race under the Interstate Commerce Clause – one of the early integration cases decided by the high court. Several years later, Judge Robinson – as the named plaintiff – sued the District of Columbia Bar Association for its refusal to permit black lawyers to use the Bar’s law library located in the federal courthouse. This case ultimately led to the integration of the Bar Association.

Judge Robinson’s legal career took a dramatic turn in 1965 when President Lyndon Johnson nominated him to sit on the District of Columbia Juvenile Court. One day in 1966, while presiding over a juvenile trial, the Judge’s secretary handed him a note that there was someone in his chambers who had to see him immediately. After apologizing to the lawyers and calling a brief recess, Judge Robinson was greeted by a Justice Department representative who said that President Johnson was going to nominate the judge the next day for a seat on the United States District Court. The representative handed Judge Robinson a package of forms and asked the judge to fill them out, to not tell anyone about the nomination, and that someone from the Department would pick up the forms in several hours. After doing the best he could to complete the forms over a long lunch break, Judge Robinson went back into the courtroom to resume the trial. The trial continued to the next morning, and soon Judge Robinson noticed courthouse personnel coming into the courtroom – President Johnson had just nominated him publicly to the federal bench. Judge Robinson was confirmed by the Senate several weeks later. He was 42 years of age.

In the course of his oral history, Judge Robinson discussed a range of topics, including the importance of trial preparation, the need to have a grasp of the rules of procedure, the increase of expert testimony, the decline of civility among attorneys, the “revolutionary approach to legal education,” and the explosion in the volume of cases in the federal courts. Judge Robinson described why he did not permit jurors to take notes during a trial, his method of instructing a jury on the law (only on infrequent occasions providing the jury with written instructions), and the handling of physical evidence during jury deliberations. Judge Robinson also talked about the relationship between trial courts and appellate courts, explaining why it was “highly desirable” for an appellate judge to have trial court experience.

Judge Robinson also recounted some of the memorable moments of his service on the District Court, including his first trial on the federal bench that was a criminal trial involving ten members of the New York Mafia charged with selling narcotics to drug kingpins in the District of Columbia. There were so many lawyers representing the defendants that the case was tried in the Sixth Floor Ceremonial Courtroom. Judge Robinson also described another trial of a defendant charged with the theft of manuscripts from the Library of Congress. After the defendant discharged his lawyer and proceeded pro se, Judge Robinson stated that the defendant “was one of the most difficult people in the courtroom that I’ve ever had.”

Judge Robinson’s oral history is full of many other interesting topics, including his role as Chief Judge of the District Court, the welcomed increase in the numbers of women judges on the Court, the debate over television in  the courtroom, and the tumultuous events of the Watergate years. There is also an entertaining discussion of the numerous notable trial lawyers who appeared before him. This oral history makes for fascinating reading about one of most influential judges of the United States District Court for the District of Columbia.

Discrimination in the 1940’s