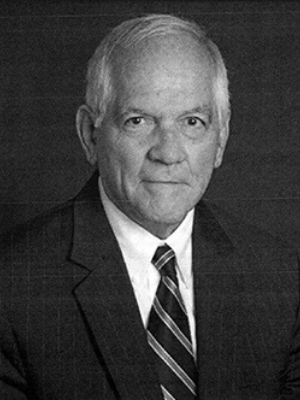 Based on Judge James Robertson’s Oral History for the D.C. Circuit Historical Society

When U.S. District Court Judge James Robertson was very young, his family moved from Cleveland to nearby Oberlin, Ohio.  The family made the move to the rural college town for what his father, a banker, called “high thinking and simple living.”  His mother kept a watchful eye on her three children while also pursuing her career as a psychiatric social worker.  “My mother never told us whether we were being good or bad,” Judge Robertson wryly recalled, “she told us whether we were being normal or not.”

In his oral history, conducted during seven meetings between 2003 and 2015 with interviewer Ann Allen, Judge Robertson reveals the path that led him from small town Ohio to service on a U.S. Navy destroyer, from law firm practice in Washington, D.C., to civil rights lawyer in Jackson, Mississippi, and back again, and from the federal bench to private mediator.

The course of his life truly changed, Judge Robertson recognizes in the oral history, when he received a scholarship to a military boarding school.  In turn, a Navy ROTC scholarship to Princeton University followed.  Judge Robertson took in all Princeton had to offer, including serving as editor-in-chief of University’s humor magazine.  At Princeton, the sparks that ultimately led him to law school were also ignited, as he explains, by two very different guest speakers – Edward Bennett Williams and Alger Hiss.  Still more sparks were ignited by a blind date in his senior year, which led to a wedding in 1959, three months after graduation, to his wife, Berit Persson.

After Princeton, however, Judge Robertson’s aspirations for law school were on hold.  The newlyweds first moved to a naval base in Pensacola, Florida.  Among other assignments, in 1962, Judge Robertson was on one of three ships poised in the Atlantic Ocean to pick up astronaut John Glenn and the Friendship 7.  But perhaps his greatest maneuver in the Navy, he recounts, was managing to switch his final assignment from teaching in the ROTC program at Iowa State to working at the Office of Naval Intelligence at the Pentagon.  Iowa State did not have a law school.  But his assignment to the Pentagon allowed him to enroll as a night student at George Washington University.  After two years, he completed his military service and became editor-in-chief of the law review.  He transferred to the day program of the law school and graduated within three years.

The day after his June 1965 law school graduation, Judge Robertson joined the fledgling law firm of Wilmer Cutler & Pickering as its tenth associate.  In the oral history, Judge Robertson shares how, once again, the course of his life was changed.  At Wilmer, he came under the mentorship of (future Judge) Louis Oberdorfer (himself fresh from the office of Attorney General Robert Kennedy).  Robertson soon became immersed in civil rights work, including handling criminal cases that arose after the riots in spring of 1968 following the assassination of Martin Luther King, Jr.  A few months later, not long after the assassination of Robert Kennedy, he experienced an identity crisis as a young lawyer.  With the support of Oberdorfer and Wilmer, Cutler, Judge Robertson moved to Mississippi to work for the Lawyers Committee for Civil Rights for several years, handling principally voting rights and criminal defense cases.  After returning to Washington, D.C., and Wilmer, Cutler in the early 1970s, he quickly rose to partner, and twenty years later to President of the District of Columbia Bar.  In 1994, he was nominated by President Clinton for the United States District Court for the District of Columbia; he was confirmed by the Senate that same year.

In the earliest interviews for his oral history, Judge Robertson assumed that his service on the information technology committee for the federal courthouse in D.C., and as Chair of the Judicial Conference Committee on Automation and Technology, would leave his heaviest mark on the Court.  Through that service, he played a leading role in ushering in the electronic age of the federal courts in the District of Columbia, in particular with electronic case filing.  But midway through the oral history, it was evident that his involvement with issues pertaining to electronic surveillance would eclipse electronic docketing.  In December 2005, Judge Robertson abruptly resigned from the Foreign Intelligence Sureveillance Act (“FISA”) Court.  His resignation came within twenty-fours hour of a New York Times story reporting that, for several years, President George W. Bush had authorized surveillance of telephone calls, both inside and outside the country, without a FISA warrant.  At the time, Judge Robertson declined to speak publicly about his resignation.  In the oral history, however, he expansively and candidly recounts his reactions to the Times article, his intentions at the time he resigned, and his thoughts on legislation that subsequently altered the FISA program.  His reflections came first in an interview for the oral history in 2006, one year after his FISA resignation, and again almost a decade later in 2015.

The FISA controversy was one of two times during his tenure on the bench that Judge Robertson found himself referenced on the front page of every newspaper in the country.  The other was his 2004 decision in Hamdan v. Rumsfeld, which Judge Robertson sums up in the oral history as “primarily, almost exclusively, about the allocation of powers between Congress and the Presidency.”  Hamdan, a detainee at Guantanamo Bay, was scheduled for trial on terrorism charges before a Military Commission established without congressional action.  Judge Robertson shares in the oral history how one amicus brief, among the many submitted, stood out.  Filed on behalf of a group of retired general and flag officers in the Armed Services, the brief argued that the military commissions were in violation of the Geneva Conventions, and emphasized that if the United States permitted trials under those conditions, it could expect the same treatment of American military personnel captured on enemy battlefields.  Likewise, Judge Robertson describes in the oral history the “very quiet, subtle demonstration, but a demonstration nonetheless” by twenty to thirty uniformed military officers in his courtroom on the day of oral argument, silently nodding in agreement with the petitioner’s counsel.

Judge Robertson’s decision in Hamdan granted habeas relief and stayed the Military Commission’s proceedings.  That decision was reversed by the District of Columbia Circuit.  However, his ruling was ultimately affirmed by the United States Supreme Court.  Judge Robertson also reflected on that turn of events in his oral history:  “And it is true that for a trial judge there is no sweeter day than the day in which something you decided has been vindicated by the Supreme Court after being reversed by the Court of Appeals.  It is a beautiful, beautiful day.  And it’s a sin to be so vainglorious about that, but I am a sinner.”  Or maybe – as his mother would have said – his reaction was neither good nor bad, just “normal.”

Judge Robertson retired from the bench in June 2010 but continued to address complex cases as a private mediator and arbitrator.  He passed away on September 7, 2019, at the age of 81.