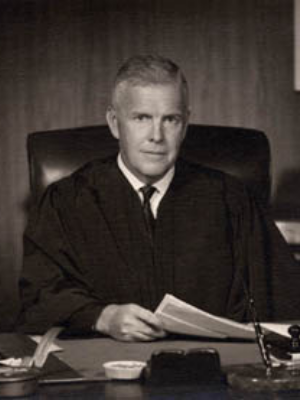 Near the end of his life, Judge John H. Pratt was interviewed by Jake Stein, himself an icon of the D.C. bar.  This two-session interview was a chat between friends and it reads as such.  It is relaxed; it is surprisingly gossipy; it is fun.

Pratt was appointed to the federal bench by President Lyndon Johnson.  He believed both Ramsey Clark, then the Attorney General, and Judge David Bazelon tried to thwart the appointment.  They saw him as too much of a law and order guy.  But their efforts failed and D.C. Circuit Judge Roger Robb helped grease the way for a smooth hearing by calling his former client and then-Mississippi Senator James Eastland.  As described by Pratt, Eastland chaired a hearing that lasted “every bit of five minutes.”  He “presided with his fat belly sticking out and a cigar in his mouth.  It was very informal.”

Both Stein and Pratt knew all the lions of the D.C. bar, though their shared stories are not confined to D.C. litigation.  For example, Pratt credits John Lord O’Brian (a Justice Department official and later a partner at Covington Burling) with helping to save the Harvard Divinity School from extinction.  According to Judge Pratt, Harvard president James Conant had no interest in the school.  It needed money and Conant was not inclined to raise it; he felt money could better be used for the School of Education.  But O’Brian, along with New York lawyer Grenville Clark, raised enough money earmarked for the Divinity School to convince Conant to relent.

In the course of the oral history, Jake Stein informed Pratt of the circumstances of the elevation of Charles Evans Hughes to the Supreme Court.  According to Stein, President Hoover had promised Hughes a position on the Court but then changed his mind.  He was advised to keep his word and make the offer because, he was assured, Hughes would have to turn it down since his son was the Solicitor General of the United States.  That would present an irreconcilable conflict.  The plan did not work out as Hoover hoped.  Rather, Hughes accepted and his son resigned as Solicitor General.

Pratt sheds light on another landmark moment in American history, sharing information he learned from his colleague Judge Edward Tamm.  Tamm told him he had advised Adolph Berle, then Assistant Secretary of State, about Alger Hiss a full five years before Hiss was indicted.

While Judge Pratt acknowledged many of the giants of the D.C. bar, he was not adverse to telling tales of their misdeeds.  For example, he tells of coming across an ex parte communication between an attorney at Wilmer Cutler and an FDA commissioner while a case was pending before the agency.  He admitted lacking full trust in one D.C. icon and having personal dislike for another.  He agreed with Stein that a third was a nice guy but “mashuga” (Yiddish for a bit crazy).

Judge Pratt didn’t pull any punches in describing his judicial colleagues either.  He described one as very “complex” and “able” but “having a certain arrogance about him.”  And he felt some of the appellate judges were “result-oriented.”

Pratt also saw problems with the judicial system itself.  He worried that the jury system was not well suited to complicated cases.  And although he “freely admit[ted]” to being pro-government in criminal cases, he felt the Sentencing Guidelines, in effect at the time of his interviews, were “atrocious.”  “If I can bend the rules in connection with some of these criminal sentences, I’ll do it every time.”  Because he felt the Guidelines were at times so unjust, he was tempted to “get rid of some of these cases if I can reasonably do so by sustaining a motion to suppress.”  Not surprisingly, he had no sympathy for mandatory minimum sentences either.

Judge Pratt was a man ahead of his times in some ways.  He was proud to have hired more female clerks than any of his male colleagues.  But he was also a man very much of his times.  In describing his clerks, he said, “the girls have been fine.”

In sum, Judge Pratt provides a candid, colorful, and blunt assessment of the people and system of his era.  He loved his job and readily agreed with William Howard Taft that being a district court judge is “the best job in the world.”