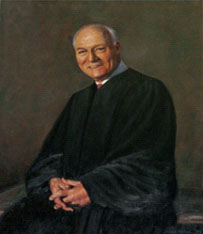 Judge Oberdorfer, a native of Birmingham, Alabama, was appointed United States District Judge for the District of Columbia on October 11, 1977 and entered on duty November 1, 1977. Judge Oberdorfer elected to take senior status on July 3, 1992. He is a 1039 graduate of Dartmouth College, and received an LL.B. degree from Yale Law School in 1946, after military service fro 1941 to 1946.

At the time of his appointment to the bench, Judge Oberdorfer was a member of Wilmer, Cutler and Pickering in Washington, D.C., and was serving as President of the District of Columbia Bar.

He also served as Co-Chairman of the Lawyers’ Committee for Civil Rights Under Law, 1968-1969, a member of the Advisory Committee on the Federal Rules of Civil Procedure, and was Chief Executive Officer of the Legal Services Corporation during its formation in 1975.

From 1962 to 1984, he was a member of the Judicial Conference Advisory Committee on Civil Rules. He is presently a member of the American Bar Association, the American Law Institute, the District of Columbia and Alabama Bars, and an Adjunct Professor at the Georgetown Law Center.

Judge Oberdorfer is married to the Elizabeth former  Weil. They have four children: John, Kathryn, Thomas, and William, and five grandchildren.