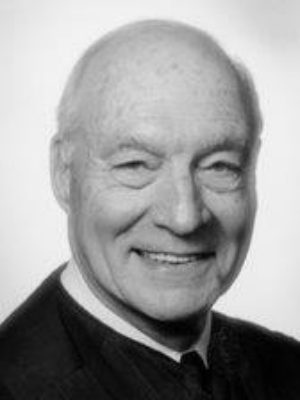 As the only Assistant Attorney General in the Kennedy administration from the deep South, Louis Falk Oberdofer worked closely on civil rights issues during a turning point in history.  Judge Oberdorfer was born and raised in Birmingham, Alabama, and attended an all-white high school during a time when all of the schools in the area were segregated.  In his oral history, Judge Oberdorfer reflects on those years in the Kennedy Justice Department, as well as his upbringing and legal career, including how the job of a District Court judge changed dramatically during his time on the bench.

After graduating from Dartmouth College in 1939 and matriculating at Yale Law School that fall, Judge Oberdorfer’s time in law school was interrupted when he was drafted into the Army in 1941.  He recalled leaving Yale Law School and driving to Alabama during the World Series of 1941 – listening on the radio when Mickey Owen dropped the third strike.  After being inducted into the Army in October 1941, Judge Oberdorfer shipped by train to Fort Eustis, Virginia, a coast artillery training camp.  He recalled the culture shock of moving from Editor-in-Chief of the Yale Law Journal to a trainee private in an artillery battalion; he was detailed as latrine orderly as his new wife and father-in-law drove to meet him on what was supposed to be his first day off.  And then within weeks, following the attack on Pearl Harbor, Judge Oberdorfer shipped out, rumored to be headed to the Dutch East Indies.  He recalled sitting on the deck of a transport armed with 75-millimeter field guns strapped in the bow; sharing a hammock with someone else for half the night; and ending up in Panama, assigned to the coastal artillery protecting the entrance to the Panama Canal.  After acceptance to Officers’ Candidate School, Judge Oberdorfer was eventually assigned to anti-aircraft artillery at the Harbor Defenses of Delaware, ending up in the spring of 1943 at Fort Miles in Lewes Delaware.

After being discharged in January 1946, Judge Oberdorfer returned to law school in New Haven for a semester, reuniting with his good friend Byron White, who had served in the Navy.  Justice Hugo Black renewed a previous offer for a clerkship, and Judge Oberforder served as his law clerk during the 1946-1947 Term, the same year that White clerked for Chief Justice Fred Vinson.

Judge Oberdorfer describes his clerkship with Justice Black as “one of the pinnacles of my life.”  That year, Black wrote his dissenting opinion in Adamson v. California, arguing that the Bill of Rights should be fully incorporated against the states – which Black often said later was his most important opinion.  Black had been trying for several years to reconcile his very narrow view of the Fourteenth Amendment’s Due Process Clause with his view of the preeminence of the Bill of Rights.  “Black deplored the idea of substantive due process; he had been one of those who bemoaned the Court’s use of the Due Process Clause to knock down social legislation in the 1930s.”  In Adamson, “he was able to make that reconciliation.”

After his Black clerkship, Judge Oberdorfer was torn between going back to Birmingham and accepting one of the offers he had to work in Washington.  He decided to work with a small group of lawyers in the Washington office of Paul, Weiss, Wharton and Garrison, which had just been formed.  He later joined Lloyd Cutler in the spring of 1951 in the firm Cox, Langford, Stoddard and Cutler, where he worked as tax partner from 1952 until 1961, when President Kennedy appointed him, at Byron White’s recommendation, to Assistant Attorney General in charge of the Tax Division, where he served until June 1965.

After the courthouse-door incident in Tuscaloosa involving Governor George Wallace, President Kennedy made a speech calling for the enactment of what eventually became the public accommodations provision of the Civil Rights Act of 1964.  In June 1963, Judge Oberdorfer organized a gathering of about 250 lawyers at the White House; they were addressed by the President, the Attorney General, Vice President Lyndon Johnson, and Secretary of State Dean Rusk (who was also a Southerner).  Judge Oberdorfer worked from within the government to help the group become a corporation and move forward as the Lawyers’ Committee for Civil Rights Under Law.  Judge Oberdorfer describes the importance of this group and its work – fighting the “last battle of the Civil War in many ways” – and his perspective about civil rights, having grown up in a segregated society but then awakening “to what was really going on.”  Judge Oberdorfer also discusses the Bay of Pigs, Robert Kennedy’s efforts to resolve differences with the Cubans both before and after the missile crisis, and the friendship that he developed with Robert Kennedy.

Judge Oberdorfer describes two aspects of the work of a DC District Court Judge that changed dramatically during his years on the bench:  when he first became a Judge, there were relatively few criminal cases (dockets were dominated by civil cases); and District Judges were invited frequently to sit with the Court of Appeals, which was somewhat short-handed, and also, he believed, trying to establish a relationship with the District Court judges.  “Those two characteristics of the work have now been completely reversed.”  Dockets in DC became inundated with drug cases; and the Court of Appeals stopped inviting District Court Judges to sit on appellate panels.  Judge Oberdorfer believed that drug crimes should be relegated to the local courts.  He further maintained that imposing mandatory minimums in drug cases was similar to “life sentences,” particularly for some individuals who would “respond to an appropriate prison environment and be restored to a useful life.”  In his oral history, he also discusses (i) the benefits of enhancing facilities in prisons and outpatient facilities for treatment of addicts; (ii) the value of split sentences, permitting suspension of a portion of the sentence, on the condition that, while in prison, the defendant uses the opportunity for treatment and is committed to remaining drug-free and in treatment for a period of probation or supervised release; and (iii) the erosion of Fourth Amendment rights, which he views as having been “trampled on” in the War on Drugs.

And Judge Oberdorfer recounts several notable cases, such as Hohri v. United States, involving Japanese Americans who had been interned during World War II; interesting First Amendment cases, for example, involving the anti-nuclear street people who lived in Lafayette Park, and involving prayers conducted in Congress; a case involving the impeachment of Judge Walter Nixon of Mississippi; a case that exposed covert efforts by the FBI to harass civil-rights demonstrators and anti-war demonstrators; and a case involving the crash near Saigon about a week before the war’s end of an Air Force cargo plane manufactured by Lockheed, brought on behalf of a class of Vietnamese orphans.

Reflecting on his relationships within the courthouse, Judge Oberdorfer discusses the wonderful job of law clerks, and how he has valued his clerks as peers and very good friends, who have the opportunity to “see life in the raw, instead of having problems canned and packaged for them, as is the case in law school or in an appellate court.”  He also discusses his great affection for Bill Bryant and profound admiration for Judge Bryant’s “instinctive sense of justice.”  And he reflects on his view of the Constitution as “the greatest document ever struck by the hand of man,” and his belief that “a compassionate application of the language and the legislative history of the Constitution can continue this country, as Reagan put it, as a ‘beacon on the hill.’”