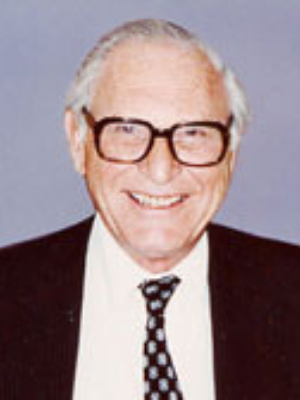 Based on Bernard I. Nordlinger’s Oral History for the D.C. Circuit Historical Society

“Washington lawyers,” who practice before the federal government, became a widely recognized branch of the American legal profession only with the dramatic expansion of the American state during World War II and the Cold War.  But the D.C. Circuit had long been and continued to be home to an older species of lawyers, many of them native to the District of Columbia, who served the legal needs of its residents much as the members of local bars elsewhere did.  Call them “Washingtonian lawyers.”  Of these, one of the most interesting was Bernard I. Nordlinger (1909-2001), because his roots in the District were so deep, because his Jewish identity made him a critical observer of as well as participant in the life of the local bar, and because he witnessed the rise of the “Washington lawyers” without becoming one himself.

“Third generation Washingtonian” was how Nordlinger described himself on his resume, just after his name and place and date of birth.  His ancestors emigrated to the United States from middle Europe before the Civil War, fought on both sides of that conflict, and then settled in the District.  For decades his family owned a shoe store on M Street in Georgetown, lived around the corner, and attended the city’s oldest synagogue, the Washington Hebrew Congregation.  His father expected “Buck” to take over the store, but from an early age he wanted to be a lawyer.  “I just never had anything else in mind.”  He led his class when he graduated from the George Washington University Law School in 1933.

Nordlinger was more fortunate than many entering the legal profession in the depths of the Great Depression, because he had already been clerking for Milton King, an established practitioner who asked him to become his partner.  King’s social connections brought in some clients, including George Marshall, the owner of the Washington Redskins.  Still, he scrambled for all kinds of legal business and witnessed firsthand the gaucherie of the Police Court.  That still left time for getting the latest from his brothers at the bar over lunch or attending court when Frank Hogan or some other spellbinder was in action.  Excluded from lawyers’ social clubs because of his religion, he nonetheless participated in the Bar Association of the District of Columbia enthusiastically because of the camaraderie of its annual meetings and the opportunity the group afforded for legal reform, including replacing the District’s hopelessly unwieldy corporation laws.  He became its president in 1972, just in time to resist, unsuccessfully, the establishment of a mandatory or “unified” bar.

Nordlinger grew professionally over the course of his career.  As estate and gift taxation increasingly affected his clients, he got an LL.M. on the subject from Georgetown Law.  The instruction in taxation he most vividly remembered, however, was an hour’s discussion of a complex case with the great tax lawyer Robert N. Miller.  Miller, who refused compensation for the session, listened patiently, acknowledged that the matter was difficult – he likened Nordlinger’s situation to learning to play the “violin on a Stradivarius” – but told Nordlinger he did not need anyone’s help and was handling it well.

As a thirty-year-old father of two, Nordlinger thought the odds of his conscription were low; still he was in the auditorium on October 29, 1940, when his number came up seventh in the nation’s first peacetime draft.  Commissioned a lieutenant in the U.S. Navy Reserves, he was assigned to a naval procurement unit.  The financial education he acquired would prove invaluable in his postwar career, which included service as an officer of local banks and savings and loan associations.  His service had other unexpected results.  Shortly after Nordlinger left the service, a lawyer he knew from the Navy came to his office, still in uniform, and asked for a position after his imminent discharge.   Nordlinger advised the man, Richard Milhous Nixon, to try his luck back in Whittier, California.

Another wartime connection proved more eventful.  After the war, an electrical engineer who was his superior in a unit tasked with terminating naval contracts hired Nordlinger to reorganize his company.  When he then asked him to become its general counsel, Nordlinger declined:  he would have to move to Chicago, and, as he later put it, “my home was here.”  Nonetheless, the engineer hired him to defend his company in a major antitrust prosecution.  The experience Nordlinger acquired led to more antitrust cases, including a landmark case with the National Football League as his client.

Ultimately, Nordlinger concluded that such cases required a bigger staff than his firm possessed.  The realization made apparent to him a path not taken.  After the war, Jews and other ethnic outsiders long excluded from New York’s corporate law firms had no difficulty finding clients needing representation before the federal government.  Starting from beginnings hardly less humble than Nordlinger’s, some had built major firms in the nation’s capital.  At first, he later recalled, Henry Fox was just one of “two young boys in a one-room office of a man named Jesse Miller,” who had practiced in Washington since 1920.  But Fox took “the risk of promising huge salaries to people who graduated from good schools” and acquired excellent reputations in government service.  Today, his firm, Arent Fox, has hundreds of lawyers and a global reach, while King & Nordlinger is much smaller, with a local practice.

Nordlinger sometimes spoke of his failure to build a large firm with regret.  “We never did that, and I would say it’s my fault,” he said on one occasion.  “I didn’t have enough early training to have the depth of vision, the business horizons, to do what could have been done.”   But the founders of Arent Fox were not native Washingtonians; in their formative years they were not inspired, as Nordlinger had been, by lawyers who were lions not only in the law but in the civic, religious, and philanthropic lives of their communities.  “When I was young and coming along,” he once explained, “I had great ambitions to be like so many lawyers” who modeled for him ideals of practice and of conduct.  Nordlinger’s many professional honors suggest he became such a model for others during his lifetime, and his career remains instructive today.

Author: Federal Estate Tax and Tenancies by the Entirety Created Prior to 1916; Federal Income Tax Aspects of Transactions by a Corporation in Shares of its Own Capital Stock; Block Booking and The Sherman Act; Patent Pools and The Sherman Act; Administrative Cancellation of Licenses; Aspects of the National Labor Relations Act; Changes in Corporate Structure Under the D.C. Business Corporation Act; A History of the Washington Hebrew Congregation.

Courtesy of the Nordlinger Family

Bernard Nordlinger as a child

Bernard Nordlinger as a young boy

Bernard Nordlinger as a lifeguard 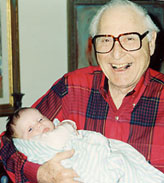 Bernard Nordlinger with his grandchild