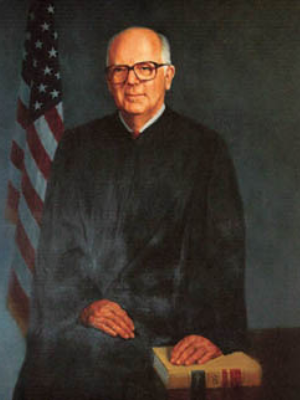 Judge Frank Q. Nebeker’s career has always involved public service. Most noteworthy perhaps, in 1987, after serving eighteen years as an Associate Judge on the District of Columbia Court of Appeals, he was appointed to be the Director of the United States Office of Government Ethics, a post he held for two years. He was then appointed to be the first Chief Judge of the newly established United States Court of Veterans Appeals, where he served for eleven years. In 2000, he returned to the D.C. Court of Appeals as a Senior Judge and has continued to hear and help decide cases there.

As Director of the Office of Government Ethics, he was faced with a challenging matter already receiving public attention. There were allegations of conflicts of interest on the part of Attorney General Edwin Meese; an independent counsel had investigated and issued a report declining prosecution; and Mr. Meese had claimed exoneration and left the government. Judge Nebeker concluded that the matter was not moot, because a primary purpose of the Ethics Office was educational, and he directed his staff to prepare a statement of facts not in dispute. He then issued his Office’s opinion informing the Department of Justice and the public of ethical lapses that, while not warranting prosecution, were nonetheless not to be ignored.

Judge Nebeker’s account of the formation of the Court of Veterans Appeals is both funny and seriously informative. If you’ve ever wondered how a new government agency finds office space and furniture and then gets funds flowing from the Treasury to pay staff, Judge Nebeker has done it. It was a bit of a do-it-yourself project, and he tells you how it’s done. As chief of a new appellate tribunal during its formative years, Judge Nebeker applied his long-felt concerns for fairness and openness in the process of rendering decisions that affect individuals’ important interests, while at the same time managing the new court’s large flow of cases expeditiously.

Judge Nebeker was born in Ogden, Utah in 1930 and spent his early life there. The law was in his background, as he was the son of a local trial court judge and great nephew of an Assistant Attorney General for the Antitrust Division of the Department of Justice. He attended Weber College and completed college and a year of law school at the University of Utah before marrying a high school and college classmate and moving to Washington, D.C. He completed law school at American University while working in the correspondence unit of the Eisenhower White House.

Judge Frank Q. Nebeker was appointed to the District of Columbia Court of Appeals in 1969 by president Nixon. He assumed Senior Judge status in 1987.

Judge Nebeker was born and reared in Utah. He holds an Associate Degree in history from Weber College, a Bachelor of Science in political science for the University of Utah, and a law degree from American University Law School.

Judge Nebeker’s career has always involved public service. During law school, he worked as a correspondence secretary in the Executive Office of the President at the White House. He entered the Department of Justice, Internal Security Division, Espionage and Sabotage Unit after law school.

From 1958 to 1969, he served as an Assistant United States Attorney for the District of Columbia, serving as the Chief of the Appellate Division from 1962 until his appointment to the Court of appeals bench in 1969.

After retiring as an Associate Judge, Judge Nebeker served from 1987 to 1989 as Director of the United States Office of Government Ethics, where he was responsible for developing rules of conduct for the members of the Executive Branch.

Judge Nebeker’s tenure as Director ended in 1989, when he was appointed as the first Chief Judge to the new United States Court of Veterans Appeals (now the United States Court of Appeals for Veterans Claims), a position he held until his retirement from the Court in November 2000. Judge Nebeker then returned to his current position on the Court of Appeals.

Judge Nebeker has been active for many years in the planning and presentation of education programs for law students, attorneys, and appellate judges throughout the country. He served as an Adjunct Professor and Guest Lecturer at several District law schools.