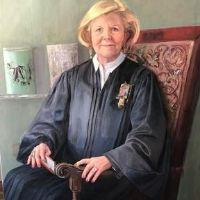 Other Nominations/Recess Appointments:
Nominated to U.S. District Court for the District of Columbia, March 29, 1996; no Senate vote

Artist
Danni Dawson, a professional artist, and teacher for over 25 years, has exhibited her paintings both nationally and internationally. She has received a number of awards including the Allied Artist Award, the Salmagundi Painting Prize, the Audubon Award, as well as an award from the National Academy of Art and Design.

Ms. Dawson has painted more than 300 portraits of heads of state, dignitaries, university officials, and senior members of the military and medical communities.

Many of the portraits and still lifes painted by MS. Dawson are displayed in collections throughout the world. Her 17 foot bronze sculpture, “St. Joseph, the Worker,” appears on the facade of St. Joseph’s Hospital in Towson, Maryland.