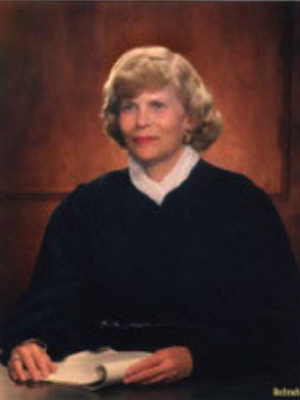 By Paras N. Shah
Based on Jennifer M. Porter‘s Oral History for the Historical Society of the District of Columbia Circuit

Judge Joyce Hens Green’s life has been full of unique and often trying experiences. Those experiences shaped her into the jurist that she was.

The daughter of immigrants, Judge Green grew up during the Great Depression. She had a baby alligator as a childhood pet. She began reading at the age of three and started school by proceeding directly to second grade.

Judge Green learned “how to play a mean hand of poker at the age of 12,” while living in a Maryland state psychiatric hospital where her father worked. Her years living at this state facility cemented her belief that all people need dignity and hope.

Judge Green’s high school years coincided with World War II. She and her family lived off rationed food and gasoline. Also emblematic of this turbulent era, Judge Green contracted polio while attending law school, which temporarily paralyzed her from the waist down. She nonetheless completed law school in two years.

After law school, Judge Green wanted to be an Assistant U.S. Attorney, but “[t]here were no women invited.” So she hung her own shingle and created a successful law practice. Along the way, she formed a special relationship with another female solo practitioner—June Green, with whom she would eventually serve alongside on the federal bench (and after whom she would name her daughter).

After nearly two decades in private practice, Judge Green was appointed to be a judge on the Superior Court of the District of Columbia. Her service on the D.C. Superior Court dovetailed with the civil rights and Vietnam War demonstrations of the late-1960s and 1970s. Indeed, within weeks of her joining the court, smoke was pouring through the windows of her chambers as riots engulfed the city.

After eleven years on the D.C. Superior Court, Judge Green was appointed to the U.S. District Court for the District of Columbia. She was the third women to ever sit on that court. Judge Green inherited the chambers of a man who once called her into those very chambers only to tell her, eye to eye, that he would never hire a female law clerk.

Judge Green’s decades on the federal district court were often marked by complex and sensitive cases. For example, she spent nearly a decade overseeing a sprawling fraud case that extended to luminaries like Clark Clifford and a former U.S. Attorney General.

The very full life that Judge Green lived before her decades of judicial service prepared her well for that challenging time—a time for which she was a perfect match.