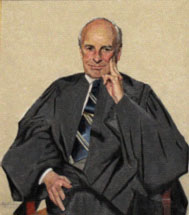 Artist
Lloyd Bowers Embry (1913 – 1979) was born in Washington, D.C., where he began taking classes at the Corcoran Gallery of Art at the age of ten. He won a scholarship to study at the Phillips Gallery of Art School and later enrolled at Yale University’s School of Art, earning a B.F.A.

After graduation. Mr. Embry traveled across the country looking for opportunities to paint portraits. He and his wife settled in Washington, D.C. where his proximity to the government led to the awarding of a number of portrait commissions, including that of Prince Bertil of Sweden. The Embrys spent summers in Truro, Massachusetts, living next door to painter Edward Hopper, whose likeness Embry painted in watercolor. Mr. Embry also explored landscape painting while in Truro.

Mr. Emby painted the portrait of Judge William B. Jones in 1978. His work is featured in private and public collections throughout the United States and in Sweden; at the Harvard Club of New York; in the Philadelphia Historical Museum; at Miami University in Oxford, Ohio; at Rice University in Houston; in the State Capitol Building in Nashville; in the Yale University Art Gallery; in the Swedish Embassy in Washington, D.C.; and in Riksband, in Stockholm.