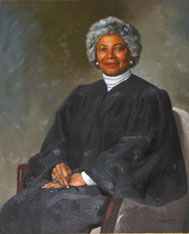 Artist
Simmie Knox (1935-) – A native of Washington, D.C., Knox graduated from the Tyler School of Art at Temple University in Philadelphia and has specialized in portraits since 1981. Knox exhibited as an abstract artist and worked for the Museum of African Art in Washington D.C. during the 1970s. His abstract art was displayed in the Corcoran Gallery of Art in Washington, D.C. in 1971. After years of painting abstract and other art forms, Knox turned full time to portraiture. His commissions feature entertainers, educators, military officers, judges, and private individuals and include Justice Thurgood Marshall in 1989, Senator Verda Welcome in 1990, Senator Herman Holloway in 1995, and Muhammad Ali in 1995. Perhaps Knox’s most notable commission was to paint the official portait of President Bill and First Lady Hillary Clinton, unveiled in 2004.