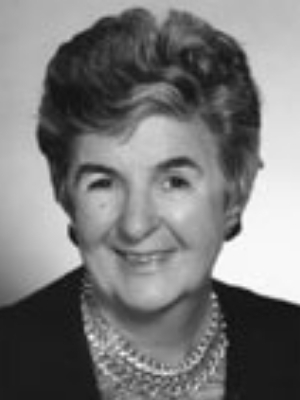 By Genevieve Beske
Based on Jodie Bernstein’s Oral History for the D.C. Circuit Historical Society

Anyone who has ever been in charge of a project can tell you that a commanding presence is necessary to get work done. Jodie Bernstein, chair of the Commission on Wartime Relocation and Internment of Civilians that recommended reparations to Japanese Americans interned
during World War II, is perhaps one of the best examples of efficiency and assertiveness under pressure. Elected as chair by her eight other colleagues on the Commission, she was chosen under the assumption that “the girl would get the work done.” Ms. Bernstein did not let them
down.

In the immediate aftermath of the bombing of Pearl Harbor, President Roosevelt signed an executive order forcibly relocating over 100,000 Japanese Americans to internment camps due to anti-Japanese sentiment. Relegated to shacks and enclosed by barbed wire, internees had to abandon homes, communities, and businesses.

Forty years later, Ms. Bernstein’s Commission, composed mainly of elected officials, conducted eleven hearings from July to September 1981 to investigate the necessity of the internment and to determine what remedy, if any, was appropriate under the circumstances.

Heading a committee full of politically entangled congressmen would be difficult enough on its own, but Ms. Bernstein also had to tackle an issue with many thorns. Right off the bat, the Commission’s main focus was on achieving unanimity “at least on the findings, never mind on
the remedies, but both,” if possible. The process of gathering the findings involved hearing from more than 750 witnesses interned or affected by internment. Bernstein powered through them with a no-nonsense approach. She recalls her colleague Senator Matsunaga begging her to bring the Commission to Hawaii, but declined, as “it just looked bad to take nine people to Hawaii in the winter.” Besides, she had work to do.

Consensus on the findings was hardly the most difficult job for the Commission. The issue of reparations was riddled with disagreements, as many of the hardships faced by interned Japanese Americans were difficult to quantify, such as racial stigma and lack of job education. Bernstein looks back on it as the most challenging aspect of her job. She recalls: “It was the one area that I didn’t know if I was going to have any consensus whatsoever.” Something this divisive could have resulted in the whole Congress opposed, save the four Japanese-American congressmen, who would “be torn to smithereens by it.”

As the inquiry occurred forty years after the war, many were split on the best course of action: whether to pursue monetary funding, or whether that would be counterproductive and give rise to racism. Ms. Bernstein drew comparisons to Jewish people during and after World War II, who had a “horrible” time deciding “who was going to speak up, [while] others that took the position … don’t rock the boat, don’t make waves.” The Japanese during the reparations debate divided along similar lines and worried that racists would take advantage of any perceived conflict.

Others were concerned that reparations offered preferential treatment to only a few abused minorities. The Commission faced concerns about consistency, considering the lack of reparations given to slaves. Many cited civil rights laws as sufficient compensation, although
others took the stance that slaves had been made to suffer for 200 years in various ways, so “why would you do it here if you didn’t do it there?”

Ms. Bernstein sped up the Commission’s work to unprecedented levels, ultimately finishing after two years, to the shock of her Washington colleagues. Senator Inouye remarked on the intense pace of the project, to which Bernstein replied, “Senator, I believe this is already 40 years old, that if we don’t finish it now, [we’re] not really going to.” This philosophy was not new to Ms. Bernstein. She placed the project on the fast track from the start. “It’s one of the things that I just feel that when you undertake – I don’t know, it’s something inherent – get it done,” she recalled.

In 1983, the Commission issued its 467-page report entitled “Personal Justice Denied,” which concluded that the internment of Japanese Americans lacked any legitimate justification and amounted to a “grave injustice.” All nine members of the Commission unanimously endorsed its findings. The report gave considerable momentum to the reparations question, and in 1988, President Reagan signed the Civil Liberties Act, which gave a formal apology to the Japanese American community and paid out $20,000 to every surviving victim. It was Jodie Bernstein’s drive and determination in the face of a challenge that gave such a life-changing project the spark it needed to be successful.

Ms. Bernstein most recently completed six years as director of consumer protection at the Federal Trade Commission (FTC). During her tenure, the agency targeted fraudulent operators on the developing commercial Web sites;  initialed a leading coordinating program in the governments’s effort to attack identity theft; reported to Congress on issues of internet privacy and, at the request of Congress, on self regulation in the alcohol industry.

She served as a spokesperson on many other consumer issues, particularly on those practices that affected children, in traditional deceptive advertising matters and in their on-line exposures. The government’s first examination of the marketing of “violent content” movies, music and video games to children was conducted under her direction. By working closely with the state attorneys general, enforcement of federal legislation like the Telemarketing Sales Act was expanded significantly.

Ms. Bernstein served for several years in the Environment Protection Agency– first as general council and as assistant administrator for enforcement of the EPA’s regulatory and permit programs. She was also general council of the Department of Health and Human Services. Her responsibilities included developing and issues a set of regulations giving affect to Title IX of the Civil Rights Act, which prohibited gender discrimination in colleges and universities. She also supervised the legal divisions of the Food and Drug’ Administration as well and the Health Care Finance Administration.

In the private sector,  she represented major companies in environmental matters and, for five years, was the general council  of Chemical Waste Management, the country’s largest hazard waste company. She subsequently served as a senior vice president of Waste Management, Inc., the parent company, where she developed the environmental compliance and ethics programs at the company.

Ms. Bernstein has been recognized as a spokesperson on consumer and environmental and health and safety issues. As such, she is the recipient of the Miles W. Kirkpatrick Award for Lifetime Federal Trade Commission Achievement. This award is presented annually to an individual whose contributions to the agency span the length of a professional career and are reflected in all facets of the honoree’s work, inside and outside the agency.

She also has received the Good Housekeeping Award, the National Consumer League Trumpeter Award and an Excellence in Government Service Award from the National Association of Women Executives in State Government. Ms. Bernstein is a board member of the Council for Better Business Bureaus.