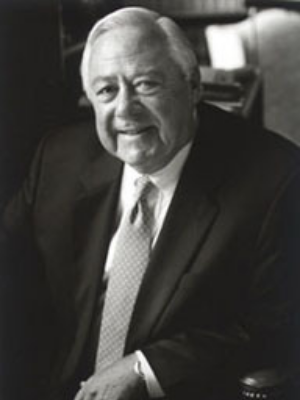 Summary of the Oral History of Honorable Thomas Penfield Jackson

By Eva Petko Esber
Based on Judge Jackson’s Oral History for the D.C. Circuit Historical Society

For Thomas Penfield Jackson, a native Washingtonian with a very local law practice, his nomination by President Ronald Reagan to the United States District Court for the District of Columbia was certainly not expected. As Judge Jackson recounted in his oral history for the Historical Society of the District of Columbia Circuit, his secretary answered the telephone one day in May 1982. “[T]he voice asked to speak to me and the caller was identified as ‘the President,’ and my secretary said ‘the president of what?’ And then immediately blanched and sat down.”

Yet, despite practicing in a small law firm alongside his father and about a dozen other lawyers, with his training and background primarily in medical malpractice defense, history had touched him even before his nomination to the bench. In 1971, his firm was asked to represent the Committee for the Re-Election of the President in a civil suit filed on behalf of the Democratic National Committee. In his oral history, Judge Jackson observed, “Watergate descended upon us, and that was a major watershed in my life.” Acknowledging that his later nomination to the bench derived from the high regard his courtroom work garnered in the highprofile Watergate litigation, Judge Jackson also acknowledged the disillusionment the case brought as well. “I was there [at the deposition] when Ed Williams said to John Mitchell, having been first duly sworn, ‘Mr. Mitchell, did you have any advance knowledge of the Watergate break in?’ To which, John Mitchell, former Attorney General of the United States said, ‘I did not.’ That was enough for me, I believed my client. As it turned out, we were all deceived.”

Born in 1937, Judge Jackson shared his coming of age in the highly segregated Washington, D.C. of the 1950s. He graduated from high school just weeks after the U.S. Supreme Court decided Brown v. Board of Education in May 1954. He went on to Dartmouth College, then an all-male student body, as a Naval ROTC student, graduating in 1958. During his summers in college he served aboard ships that traveled around the world. “I fell hopelessly in love in Stockholm, and came about this far from deserting the Navy which would have ended my naval and legal career shortly. But I had sense enough to get back on board ship.”

After serving his active duty with the U.S. Navy, Judge Jackson went on to Harvard Law School, graduating in 1964. Throughout his oral history, Judge Jackson never offered predictable platitudes, but rather was generous with his candor and insight. “It’s hard to work up any warmth for Harvard Law School . . . . [T]here is no question in my mind . . . that there was then an aristocracy of intellect that was carried to absolutely ridiculous extremes when you would separate ten places or twenty places in a class by a decimal point grade, when a failure to be on the law review was like the scarlet letter of failure. On the other hand, of course . . . the education that we got there was absolutely superb.”

As a federal district judge, Judge Jackson presided over many high-profile cases. These included the 1990 trial of Marion Barry, Jr., the popular Mayor of the District of Columbia, on drug charges emanating from a videotaped sting operation, and the 1987 perjury trial of Michael Deaver, a former member of the Reagan Administration and the first person indicted under the Ethics in Government Act’s provisions for the appointment of special prosecutors. Judge Jackson also presided over the 1998-1999 non-jury trial of Microsoft Corporation in an action brought by the U.S. Justice Department for alleged federal antitrust violations. Each of these cases, controversial in its own right, also raised controversy concerning actions of Judge Jackson himself.

In particular, Judge Jackson discussed at length in the oral history his decision to meet privately with a New York Times reporter during the course of the Microsoft trial, on the condition that his contemporaneous comments would not be published until after the conclusion of the case. Judge Jackson stood by his decision despite castigation by the D.C. Circuit; the appellate court overturned his ruling that Microsoft should be split in two and reassigned the case to another judge on remand. Notwithstanding his frustrations generally with managing the press in high profile cases, Judge Jackson described his regard for the role responsible journalists play in our free society. In an early interview session of his oral history, conducted almost five years before the Microsoft trial occurred, he also revealed, “[O]nce I got beyond wanting to be the second baseman for the Washington Senators – I was torn between being a lawyer and wanting to be a journalist.”