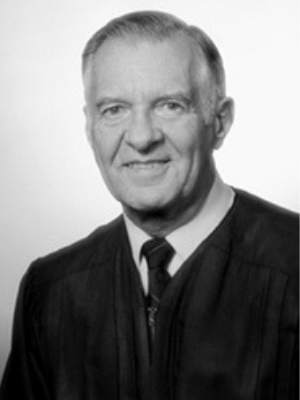 A DESCRIPTION OF THE ORAL HISTORY OF JUDGE STANLEY HARRIS

Based on Judge Stanley Harris’ Oral History for the D.C. Circuit Historical Society

This oral history could be entitled “Confessions of a DC Judge.”  It may be that no one has held more judicial posts than Stanley Harris – DC Superior Court, DC Court of Appeals, US District Court – with a stint in between as US Attorney for DC.   In fact, this writer first encountered him in traffic court!

Tasked with deciding whether the 60 to 70 criminal defendants appearing before him should be held or freed on bond or personal recognizance, Harris says he turned to the representative of the pretrial services agency sitting beside him and asked, “what do you recommend?”

“Sorry, your honor, we’re not allowed to make recommendations,” he replied.

Thinking quickly, Harris said, “If you were the judge, what would you do with this particular defendant?”

The representative said it would be o.k. to give his opinions, thus saving Judge Harris’s early career.

Judge Harris acknowledges he still had a steep learning curve ahead of him.

There was a Friday he found out he would have to preside over a landlord-tenant dispute the following Monday.  Says Harris, “I didn’t know anything about landlord-tenant law…. The last thing any judge wants to do is embarrass himself.”

So, he says, he spent the better part of a Saturday afternoon at the home of a veteran judge “getting an education on a crash basis.” When he took the bench Monday morning, he said, “I am not experienced in this area of the law.  It’s in nobody’s interests for either one of you to try to mislead me into the wrong result, so let’s play this straight up and don’t try to spin me and we’ll get along better.”

Then there were the juvenile cases.  Says Harris, “I take my hat off to judges around the country who work in the neglect and delinquency areas….  Juvenile delinquency is difficult to deal with when kids are charged with crimes, but then you have dysfunctional families, and trying to figure out how to deal with some of these family problems is emotionally trying as well as legally challenging.”

He recalls addressing the defendants and their families.  “The first thing I would say would be something to the effect that I do not think I’m going to be able to solve all your problems.  I will do my very best not to make them worse.”  And he added, “Working in those areas makes you want when you get home at night to give your kids a big hug.”

Judge Harris says he is “still haunted” by a woman who appeared before him seeking an arrest warrant for her husband.   He remembers she told “a rather alarming story” about her fear that her husband might do her considerable harm.  Issuing a warrant, Harris wrote a brief note at the bottom of the page describing the situation as extremely serious and urging that the man not be released when apprehended.

Thereafter the husband was arrested but neither the judge who subsequently handled the case nor prosecutors spotted Judge Harris’s hand-written notation.   The man was released and within a matter of hours murdered the woman Judge Harris had tried to help.

“The system in effect failed her,” he says.

Some cases presented less serious – though similarly unforeseen – consequences.  Judge Harris recalls when he was asked by the Chief Judge to try just one case stemming from the mass arrest of Vietnam War protestors charged with disorderly conduct.   Little did Harris know that the case had 850 defendants!

Says Harris, he may be the only judge in the country to have had a case with 850 co-defendants.  “It was a bit of a nightmare to deal with.”  Fortunately for Judge Harris, charges were eventually dropped against most of the defendants.

One other matter needs to be noted for fans of baseball and DC history.  Judge Harris’s father was Bucky Harris, who came to the Washington Senators as a young second baseman in 1919 and spent his entire adult life in professional baseball.  Baseball enthusiast President Calvin Coolidge attended the wedding of Judge Harris’s parents.  As a child growing up in Washington, Judge Harris played catch with baseball immortal Walter Johnson.   Harris admits he attended the University of Virginia as much for its “superb” baseball team as for its high academic ranking.