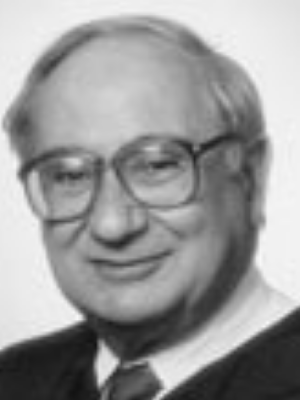 Life is an adventure and Harold Greene was an adventurer.  He was born into a Jewish family in 1923 in Frankfurt, Germany.  In 1938, the Gestapo sent the family to Poland where Harold’s father had been born.  Thereafter, it was a “saga” of returning to Germany, fleeing to Belgium, then southern France where the family hid on the second floor above a restaurant.  In late 1942, he walked over the Pyrenees to escape the Nazis, was interned in Spain, fled to Portugal, and finally, in early 1943, traveled by ship to the United States.  Harold worked as a watch maker until drafted by the U.S. Army later that year, after which he was sent back to Germany as an intelligence analyst interrogating prisoners.

On returning to the United States in 1947, Harold “decided that I was not going to trade on . . . what happened in Europe and live with that professionally and otherwise. . . . Law was the alternative that came along.”  Working days as a translator for the DOJ Office of Alien Property, he attended GW Law School at night, graduating first in his class in 1952.  He describes clerking for Circuit Judge Bennett Champ Clark, with Clark making the decisions but because of ill health leaving most of the opinion writing to Harold.

After clerking, Harold served four years as an AUSA under U.S. Attorneys Leo Rover, “a great boss,” and future District Court Judge Oliver Gasch.  Among other experiences, he describes the “great emotional high” of arguing a “sure loser” before the Supreme Court.

In 1957, Harold moved to main Justice in the newly established Civil Rights Division where he headed the influential Appeals and Research Section, which was responsible for drafting legislation and briefing frontier issues respecting voting rights and school desegregation.  He was involved in drafting both the Civil Rights Act of 1964 and the Voting Rights Act of 1965, and he briefed one of the great issues of that era:  whether to rest the provisions of the 1964 Act on the Commerce Clause or the Fourteenth Amendment.  “The Attorney General would call at 5 o’clock in the evening and say, ‘Tomorrow morning we’re going to try to integrate the University of Mississippi, get us a memo on what we’re likely to do, what we can do if the Governor sends the National Guard there, and I want to have it on my desk at 8 o’clock tomorrow morning.’”  “I was always there at the end of the telephone line from the Attorney General as to what strategy to pursue.”

In 1965, President Johnson named Judge Greene to the D.C. Court of General Sessions, elevating him to Chief Judge in 1966.  Judge Greene describes his efforts to establish the Court as an independent branch rather than a subservient arm of the city government.  With court reorganization and the establishment of the upgraded D.C. Superior Court, Judge Green became its first Chief Judge in 1971, serving until 1978 when he was confirmed as a D.C. District Court Judge.  Among many experiences leading the Superior Court, Judge Greene describes his role in planning and construction of the Carl Moultrie Courthouse.

Judge Greene’s description of his 22 years on the District Court is a tapestry of famous cases he handled and significant issues he addressed.  Leading the pack is the AT&T antitrust breakup case, which he tried for 11 months and spent another half-year determining whether the settlement was in the public interest.  The breakup was hotly debated publicly at the time.  Looking back, Judge Greene said, “I’m perfectly content that in the long run this will be seen as a good thing.”  In addition to commenting on other major cases, including the trial of Admiral John Poindexter on criminal charges related to Iran/Contra, Judge Greene tells of holding the Sentencing Guidelines unconstitutional.  Asked what he expects of lawyers appearing before him, Judge Greene responded, “that they be candid and not mislead me and that they know what their case is about.”

There’s much more in this fascinating oral history of a truly great man and judge.  When asked at the end of his oral history whether the judicial system is correctly described as “the search for truth,” Judge Greene responds, “I think a judge is supposed to search for truth, although that’s not entirely true either because truth is to some extent ameliorated by fairness and we keep out evidence . . . because it violates the Fourth Amendment and other rules of evidence. . . . So it is a search for truth ameliorated.”

The three interviews making up Judge Greene’s oral history were conducted in 1992 by David Epstein.

Appointment to the Court

Reflections of the Landmark AT&T Case