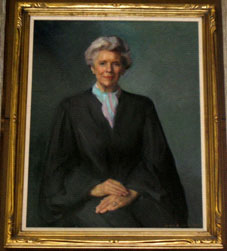 When Judge Green married in nineteen thirty-six, a legal career was not in her personal forecast. In fact, it took considerable persuasion by her husband to get her to visit the local law schools. There she discovered that most did not admit women. She did find one, the Washington College of Law, founded by two women, where she was welcomed. And it is this school, now the legal component of American University, which embraces her as one of its distinguished graduates.

Jobs for fledgling lawyers did not come easily in the depression era and they were scarcer €or pioneering women. After experiencing several rebuffs, she was hired as a trial attorney by the Washington branch of a national insurance firm. There she built a record of success which earned her the recognition and respect of her fellow trial attorneys. Thus, when she decided to strike out on her own, she found the client base of both plaintiffs and defendants supporting a rewarding career.

During the period she served on a number of legal committees, including the Gesell Committee chosen by the Circuit Judicial Council to examine the operation of all the courts and to recommend significant improvements. There she, and her fellow members, presented their recommendations to the Congress where most were adopted after the usual discussion and debate.

This active career earned a number of commendations and awards. Among these, she was a Bar Examiner for the Admissions and Grievances Committee for the District Columbia, examining in legal ethics, torts and evidence. She was a director of the Bar Association for the District of Columbia and president of the Womens Bar Association for two terms. In 1965 that organization named her “Lawyer of the Year.”

In 1968 President Lyndon Baines Johnson nominated her for the Federal Bench where she succeeded Judge Bulrnita Shelton Matthews, the first woman judge on the United States District Court fox the District of Columbia.

Judge Green served on the United States Judicial conference Jury Committee from 1979 to 1986. She also was a Judge of the Special Regional Rail Reorganization Court, serving from 1987 to 1997.

In the community, she has been commended for her “commitment to the rehabilitation of the offender and the ex-offender.” One element of this commitment was a project, undertaken by Judge Green and her husband, at night to teach District Jail inmates how to read and write.

July 26, 1968
Resolution by Members of the Committee on Admissions and Grievances of the United States District Court. (Loyally and ably served as a Member of the Committee and upon her resignation due to appointment as Judge of the United States District Court for the District of Columbia, enters an expression of affection and high regard former associates on the Committee hold, of their gratification of appointment and with warmest good wishes fox a Long, happy career on the bench.)

April 1991
Washington College of Law of American University (Recognition as a Golden Advocate, Class of 1941)

October 29, 1992
Bar Association of the District. of Columbia Certificate of Appreciation (in recognition of significant contributions in the administration of justice as Senior District Judge, United States District Court for the District of Columbia)

April 24, 1999
Washington College of Law Distinguished Alumni Award (recognizing outstanding service as a judge, as well as distinguished career at the bar, presented on the occasion of her return to the law school where, in the company of fellow alumni judges, accomplishments are publicly and proudly honored.

Cedric Baldwin Egeli, a member of a renowned family of artists, is recognized nationally as a highly esteemed portraitist. Trained first by his parents, he won the Prix de Rome while studying at the Corcoran School of Art. Mr. Egeli founded the Maryland Society of Portrait Painters and was elected ‘Exceptional Member’ of the American Portrait Society. Grand Prize winner of the National Portrait Competition, he also won the Gold Medal from the American Artists Professional League.

A highly recognized teacher, Mr. Egeli taught at Maryland Hall for the Creative Arts, the National Portrait Institute in Chicago, and the Cape Cod School of Art.

Portraits by Cedric Egeli appear in the collections of universities such as Duke and Brandeis; hospitals, including Johns Hopkins Hospital and Medical School; and in government agencies and corporations. When Christie’s evaluated the 250 portraits in the Johns Hopkins Hospital collection, Egeli’s work was adjudged to be among the most valuable of contemporary portraits.