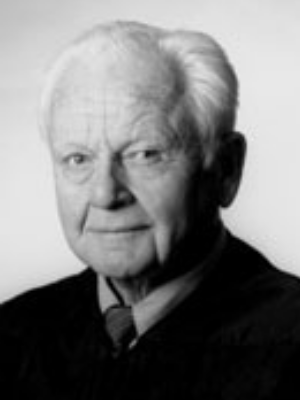 Preparing a Speech for President Roosevelt

President’s Committee for Equal Opportunities in the Armed Forces

Judge Gerhard Gesell was no stranger to the spotlight by the time he presided over the Watergate Seven trials in 1974. Decades earlier, as a young lawyer in Washington D.C., he participated in the controversial post-war congressional inquiry into who was at fault for allowing the sneak attack at Pearl Harbor. He talked about this in the the oral history he gave to the D.C. Circuit Historical Society, providing fascinating insight into the inner workings of the American political system in the face of the chaos of December 7, 1941.

After the Japanese surrendered, the United States was left to make sense of the war. One unresolved issue was the Pearl Harbor attack and, more specifically, where to place the blame for allowing it. This necessitated a congressional inquiry. Gesell served as first assistant to the Chief Counsel of the investigation and was charged with overseeing the daily investigation processes and questioning witnesses at the hearings in the Senate Caucus Room.

The investigation had a clear purpose: Gesell was to start at the point when a “possible attack was imminent and known in Washington and then to work up, event-by-event, to a final confrontation on the witness stand with the two commanders, Admiral [Husband] Kimmel and
General [Walter] Short.” Clarity in theory, however, was thwarted by ulterior motives on every side. America Firsters, who had been against the country’s entry into the Second World War, sought to use the investigation process for vindication of those beliefs, while Republicans hoped to pin President Roosevelt with the blame for allowing the attack to occur.

Specific agitators within the hearings included an America Firster, Senator Homer Ferguson, and Congressman Frank Keefe, a Republican from Wisconsin. Gesell recounted his experiences with them with a sense of humor, recalling a time when “Keefe took on General [George C.] Marshall [Chief of Staff of the Army] one day and fell flat on his face.”

He describes an interchange between the two in which Keefe, questioning General Marshall in hearings, attempted to suggest that Marshall had failed to perform his job clarifying messages for the military, specifically a message that warned of imminent attacks, because he was out of town doing “maneuvers.” After leading Marshall through a series of questions on these maneuvers, Keefe ended triumphantly with a question: “Can you think of a single good thing that came out of those maneuvers you accomplished?”

Without skipping a beat, General Marshall responded that, while away, he had observed a man who performed well with tanks who he immediately promoted and sent overseas. When asked who, he said, “A fellow named Patton.” Marshall’s response was met with laughter and resounding applause for his acumen in spotting General George S. Patton’s talent with armored forces.

Judge Gesell noted a more serious blunder by Senator Ferguson. During the war, the United States broke the Japanese communications code thanks to computer techniques unknown anywhere else in the world. To hide this fact from the world, the government published a false story that it had stolen the code. As a result, the Japanese only changed the particular formula, rather than the underlying code itself.

This allowed the United States to continue intercepting traffic at the decisive Battle of Midway, which was instrumental in turning the course of the war in the Pacific. However, one morning during the hearings, Senator Ferguson announced, on the record, that the man responsible for breaking the code had not been awarded a medal and demanded a ceremony the next day.

Gesell displayed competence in the face of foolish and complicated decisions, but he possessed an even more remarkable talent: the ability to grasp the bigger picture during a time of bias, confusion, and fear. He called Admiral Kimmel “an outstanding naval officer and a great
leader of men,” and explained that any man in the same position would have failed to prevent the attack. “The climate at the time was that the attack just couldn’t happen.”

As an example, he noted that on November 28, 1941, a war warning went out to the Panama Canal Zone, the Philippines, San Francisco, and Hawaii. Panama, the Philippines, and San Francisco all prepared themselves for war. “In Hawaii, they went and played golf.” The Naval mindset before the attacks could not “recognize its vulnerability” or grasp “that we were no longer the masters of the Pacific.” Judge Gesell placed the blame not on any individual in particular, but on the overconfidence of our country as a whole. He felt: “It took the war to wake us up.”