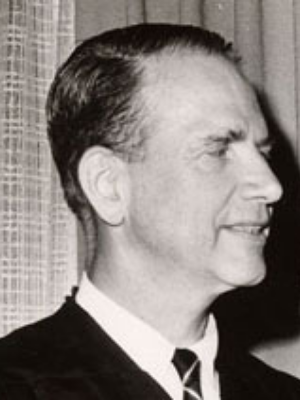 by Stuart H. Newberger
Based on Oliver Gasch’s Oral History for the D.C. Circuit Historical Society


This native son of Washington, DC was first “tutored in the law” by an appellate judge while attending Washington Senators baseball games at old Griffith Stadium – along with his boyhood friend who also later followed his father on to the appellate bench. He served as a long-time local and federal prosecutor who eventually was appointed as United States Attorney for DC, and also was one of the longest serving judges on the US District Court.

The long and fascinating career of Judge Oliver Gasch can be found in his engrossing oral history, which was taken by Stuart H. Newberger.

One of Oliver Gasch’s first memories of the old federal courthouse on Indiana Avenue was his taking boxing lessons in the basement in the early 1920s while he was attending Western High School, now the Duke Ellington High School for Performing Arts. Gasch was boyhood friends with Roger Robb, whose father Charles was a judge on the Court of Appeals. Robb later became a judge on the US Court of Appeals when Gasch served on the District Court. Gasch recalled that Robb usually had the best of him and left a lot of their blood on the floor.

Oliver Gasch was a native Washingtonian to the core. Despite school segregation in those times, he was keenly aware that Dunbar High School was the most elite public school in the country for young African Americans who showed great promise and scholarship. He fondly recalled that a number of his colleagues on the District Court bench had attended Dunbar, including Judges William Bryant, Barrington Parker, and Joseph Waddy, along with Massachusetts Senator Edward Brooke and United Nations Ambassador Ralph Bunche. He also was very close with an African-American woman who was his family’s nanny, Fanny Johnson, who had been born a slave in Virginia and worked for his family for three generations.

Gasch recalled the tough time he had getting a law job in the 1930s, after obtaining his law degree at George Washington University, because of the Depression. Eventually he obtained a job in the Corporation Counsel’s office through some helpful political connections. That was where he cut his teeth as a courtroom lawyer, trying every sort of case – from slip and fall cases to Police Court matters. He had vivid memories of the many lawyers who made their names in the city during the 1930s and 1940s, when the local Bar was much smaller and most lawyers and judges knew each other quite well.

The Second World War saw Gasch enter the Army Judge Advocate General Corps, where he served in the Pacific and, for the first time, really saw the world. By the time he returned to Washington in late 1945, the small town he had grown up in had changed dramatically. It was now a bustling city and lawyers were everywhere, many from outside DC.

In the 1950s, Gasch was recruited to serve as the First Assistant United States Attorney under Leo Rover, who had been appointed by President Eisenhower. Although he was a life-long Wilsonian Democrat, Gasch had to pretend to be a Republican to satisfy the political forces of the day. He was responsible for overseeing all appeals and the civil division. He later became the US Attorney himself, and considered this time to be the most rewarding of his career. He served until the election of President Kennedy, when he went into private practice for the first time.

In 1965 Gasch was appointed to the US District Court by President Johnson. One of his first big criminal cases was presiding over the trial of Bobby Baker, who had been an aide to Johnson. He had several trials in which Edward Bennett Williams was defense counsel, along with other trials involving prominent lawyers of the day. He also presided over several criminal corruption trials of Congressmen, including Charles Diggs and Daniel Flood, both of which were highly publicized.

Gasch also became friends with many of the judges on both the District Court and the DC Circuit, regardless of political affiliation or judicial philosophy. He noted that those days were hard to replicate, given today’s political divisions in the city and the country.