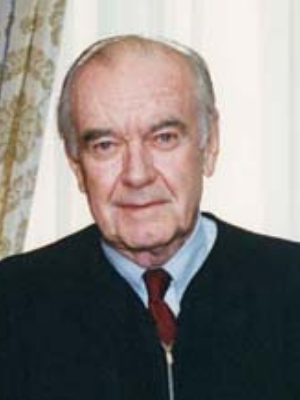 Based on Judge Thomas Flannery’s Oral History for the D.C. Circuit Historical Society

In the United States, “the bar” is quite properly taken to be synonymous with the “legal profession,” but a narrower meaning of the term, a close-knit group of lawyers who forged their professional identity in the crucible of the courts, better fits the life and career of Thomas Aquinas Flannery. He was born in 1918 in the “Swampoodle” neighborhood, home to the District of Columbia’s Irish community. His father, a carpenter, was the son of an immigrant; the ancestors of his mother, who looked after their five children, arrived in the United States a generation earlier. The family’s financial condition, while never good, was precarious after his father became too sick to work. From the age of sixteen, Flannery took one job or another, but he was also a good enough student at Gonzaga High School to earn an academic scholarship and contemplate attending Georgetown College. The family’s finances dictated that he obtain a career more quickly, and so instead he attended night law school at Catholic University, which did not then require an undergraduate degree.

In this, Flannery followed Edward Matthew Curran, fifteen years his senior, who shared his May 10 birthday, married a cousin close to his family, and became a judge of the Police Court while Flannery was in high school. (Curran would later serve as U.S. Attorney and Judge and Chief Judge of the United States District Court for the District of Columbia.) After receiving his law degree and passing the bar in 1940, Flannery worked briefly as a clerk in the Treasury Department before serving as a combat intelligence officer in the Army Air Force during World War II.

Both he and Washington had changed upon his return. Command responsibility had matured Flannery, and the District of Columbia was much more cosmopolitan than it had been in his youth. For several years he took what law jobs he could find, in the Lands Division of the Department of Justice and with several small firms. Then came the turning point of his legal career: with Curran’s help, he landed a job in the U.S. Attorney’s office. He spent nine of the next ten years in the criminal division, closely supervised by its chief, inspired by two senior trial lawyers, and, on occasion, instructed by the bench. Decades later, he still recalled Alexander Holtzoff’s rebuke in court for an evidentiary gaffe and advice on cross examination more genially imparted in chambers.

A year in the civil division prepared him for a stint at a leading local firm, but he never lost interest in criminal law. On behalf of the Board of Trade, he testified in favor of stricter enforcement of stronger criminal laws. He also opposed the Durham rule on insanity. John Mitchell, Richard Nixon’s Attorney General, took notice and appointed him United States Attorney. He thoroughly reorganized the office, shifting its focus from street crimes to white-collar offenses and complicated drug conspiracies, recruiting an unusually talented staff, and pairing juniors with more experienced seniors to create what he termed “a great training program for assistants.”

Flannery expected to be named to the U.S. District Court eventually, but when, a year and a half after his appointment, a vacancy occurred, someone else filled it. Evidently, the bench took notice. Before Judge Leonard Walsh announced his retirement, he gave Flannery advance notice so that he could get to Deputy Attorney General Richard Kleindienst before he was beset by others with candidates for the judgeship. By now a resident of Montgomery County, Maryland, Flannery faced some opposition from District of Columbia Democrats (who wanted one of their own appointed) and his home state senator (who had his own candidate), but after a few months’ delay, the Senate confirmed him in December 1971.

Judge Flannery claimed not to have a judicial philosophy. As he showed when he enjoined the Department of Health and Human Services from enforcing a regulation requiring parental notification before adolescents could obtain contraceptives, he would not let even the firmly held values acquired during his Jesuit education stop him from following the law as laid down by higher courts. He emulated the judges he admired most from his own days as a lawyer, including Richmond B. Keech, Edward Allen Tamm, and Luther W. Youngdahl. “Not in a mean way,” he explained, “but in a firm way,” they took control of their courtrooms and conducted trials as fairly as possible. He thought that criminal laws should be strictly enforced and also that the constitutional rights of defendants should be strictly defended. Appeals from administrative agencies challenged him at first, until he realized that they just required more time and preparation and then came down to a matter in judgment. In such cases, he said, “I did what I thought was right.” The rest of his docket he took in stride. “I had worked before judges so many years and had tried so many cases that there were no real surprises.” He assumed senior status in 1985 and died in 2007.