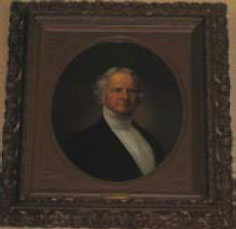 Judge, Circuit Court for the District of Columbia
Nominated by James K. Polk on December 23, 1845; Confirmed by the Senate on February 03, 1846, and received commission on February 3, 1846. Service terminated on November 27, 1855, due to appointment to another judicial position.
Chief Judge, Circuit Court of the District of Columbia USCC
Nominated by Franklin Pierce on December 23, 1845; Service terminated on March 3, 1863, due to abolition of the court.

Overall Condition
Some wear and tear on front of portrait, but overall good condition.