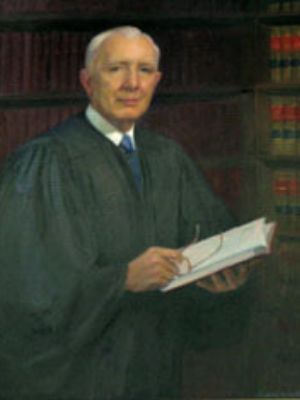 When I first met Judge Richey he insisted on taking me to a meeting of the Cleveland Club of Washington. I had just arrived in D.C. from Cleveland. He had gone to law school in Cleveland. Judge Richey made himself a part of almost everyone’s life. To me, he was the bench’s most prodigious schmoozer.

By that I mean he knew hundreds, if not thousands, of lawyers and judges. He was a one-man bar association. In a seven-part oral history with Washington lawyer Daniel Singer, Richey asserted that he knew 98% of the federal judges – by their first name. He said he “loved people.” He said he made it a point to periodically visit the staff in the Clerk’s Office, the Probation Office, and the Marshal’s Service.

Judge Richey’s resume, his judicial career, and his press clippings filled 13 scrapbooks which he kept in his office. He was Chair of the Young Republicans, General Counsel of the Maryland Public Service Commission, Chair of the Montgomery County Board of Appeals, and a member of the County’s Redevelopment Land Agency, among other civic activities. He still found time to run the Parents Association of his children’s school and head his neighborhood’s Citizens’ Association. Before going on the bench in 1971, he established a successful law practice litigating immigration cases, criminal cases, personal injury, domestic relations, “the whole panorama . . . even some copyright cases.”

Judge Richey was not a modest man. In the oral history, he recounted victories over government lawyers when he was still in private practice saying, “I found out I was better than most of them. I was able to beat them most of the time.” He was proud of the tribute from his law school, then named Western Reserve University, honoring him as a judge who “inaugurated many practices that were revolutionary at the time but are now commonly accepted.”

The transcript of the oral interviews runs 505 printed pages. One reason for its length was Judge Richey’s descriptions of his judicial innovations and long workdays on the District Court.

“I was the first judge to ever sit before 10 a.m. in this courthouse,” he said, “and I used to try cases at night.” Of his fellow judges, Richey said, “I caused a lot of furor around here. They thought I was crazy. I upset the apple cart. [But] I was not here to run a popularity contest.”

The innovations and case management tools that Judge Richey described are indeed impressive, as were his computer skills. “I’ve got everything computerized,”  he said. At the time his oral history was conducted in 1995 he said he had just 43 cases pending on his civil docket. “Hell, at least a hundred less than any other judge,” he said, “resulting in a lot of jealousy” from his fellow judges, he added. “I’m the most current judge in the nation.”

Richey’s rule for moving cases rested on establishing a firm discovery deadline and promptly ruling on motions, setting the dates for pre-trial and trial, the sooner the better. “And no continuances,” he noted emphatically. He said the ability to make prompt decisions was essential. He said if a judge doesn’t have management ability, he or she is not going to be a successful judge and justice is going to suffer.

Judge Richey attributed his experimenting with courtroom mechanics to “an impatience to do justice.” He designed forms intended to narrow the issues for trial. He claimed credit for a rule requiring attorneys to meet and confer about motions. He required both sides to provide advance statements of their witnesses’ direct testimony, as well as proposed findings before the trial even started. He regarded himself as the originator of the two-jury trial when co defendants are being tried together, for judicial economy. In such cases, either jury can be excused from hearing prior statements of a non-testifying defendant against the other since they cannot be tested in cross examination.

Richey relished being a trial judge. In a possible overstatement he described the courthouse as “a temple where the most important business of the nation is conducted.” He said, “it requires every ounce of ability and energy and innovation.” He said he asks himself, whose position is fundamentally fair? “If it is, that’s the side you’re going to rule in favor of.”

Judge Richey noted that positions he took were affirmed eight times out of eleven in the Supreme Court. He said, “I’m the guy that held President Nixon didn’t own his tapes and papers.” He said he was the first judge to say sexual harassment came within the Civil Rights Act. He was first to rule that the email and electronic messages of government employees were federal records. “That would not have happened but for this little court of mine that I run,” he said.

Asked about the legal advances he was proudest of, Judge Richey cited the work he did to see that prevailing lawyers in civil rights employment discrimination cases got attorney fees. He said that enabled the process to work.

Judge Richey wasn’t always a saint. In one instance he left open the impression that his displeasure with a defendant’s “Wall Street” lawyer may have led him to impose a substantial prison sentence when the man was expecting a slap on the wrist.

He was unforgiving about things that annoyed him. He said mediation or arbitration after a lawsuit has been filed, or as a prerequisite to filing, is seldom successful. “Does it work? A loud resounding NO,” he said. “I can do a better job of mediating disputes. I’m good at resolving people’s disputes.”

He disparaged sentencing guidelines. “Awful, very unfair. They put me in a legal strait jacket. I feel like a regulatory agency.” Of judicial term limits, he said, “That’s the stupidest idea I’ve heard of.”

He saved his biggest salvos for the distance between the trial arena and the rarified air of the appellate courts. “There is a disconnect between the real world and what the circuit judges do,” he said. “If you haven’t been down in the pits working with others and managing the (trial) process, how can you review it and say this is wrong and that is wrong?”

Did he resent being reversed? He said, “You just blur. You don’t take it personally.” Nevertheless, describing the overturning of his interpretation of the National Environmental Policy Act, he said, “I resented the reversal in that case. I still do. I’ll go to my grave saying it was wrong.

Judge Richey died in 1997 at age 73 after a quarter century on the bench. Near the end of the oral history he added a coda to all he had said about the qualities needed in a trial judge: “In addition to management ability, you ought to have somebody with experience and a record of social consciousness that enables a judge to recognize these kinds of problems and help – not to legislate – but to solve problems. The law is not a static barrier to achieving some good for society as a whole when you have public questions of broad public law. I guess that makes me a judicial activist.”

He said he would wear the characterization as a badge of honor.

Writings
Manual on Employment Discrimination Law and Civil Rights Actions in the Federal Courts, January, 1988
The Federal Judiciary: Essays from the Bench, 52 Indiana Law Journal 111, 1976
Appellate Review of Sentencing: Recommendation for a Hybrid Approach, 7 Hofstra Law Review 71, 1978
The Crime-of-Violence Exclusion in the Narcotic Addict Rehabilitation Act, The Case of Larry R. Turner, and Equal Protection of the Laws, 70 The Brief: Phi Delta Phi Quarterly 68, Winter, 1974-1975
A Modern Management Technique for Trial Courts to Improve the Quality of Justice: Requiring Direct Testimony to be Submitted in Written Form Prior to Trial, 72 Georgetown Law Journal 73, 1983
Rule 16: A Survey and Some Considerations for the Bench and Bar, 126 F.R.D. 599, 1989
Rule 16 Revisited: Reflections for the Benefit of the Bench and Bar, 139 F.R.D. 525, 1991