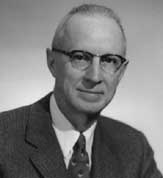 Edmund E. Campbell: An Illustrious Career at the Bar

Edmund E. Campbell was one of the leading members of the District of Columbia Bar during its formative years. Born in the century of Lincoln in 1899, Campbell graduated from Washington and Lee University at the age of 19, obtained a master’s degree in economics from Harvard University, then returned to Washington and Lee for his law degree in 1922. After serving as an economic advisor to John Lewis and the United Mine Workers of America for five years, Campbell started his legal career in the nation’s capital when there were only four judges on the U.S. District Court and three judges on the U.S. Court of Appeals for the District of Columbia Circuit.

During Campbell’s stellar legal career, first with the small but successful Washington, D.C. firm of Douglas, Obear & Douglas, and later at his own firm of Jackson & Campbell, he was involved in many significant and historical cases. His most notable case was Davis v. Mann , one of four cases, along with Reynold v. Sims , argued before the Supreme Court for four days that resulted in the 1964 decision upholding the rule of one-man, one-vote in state legislative elections. In addition to arguing Mann before the Court, Campbell was responsible for coordinating the argument of the other lawyers who appeared before the Supreme Court in those ground-breaking cases.

Campbell was involved in many interesting and diverse cases, such as representing a Russian spy, litigating the permissible parameters of the Hatch Act, and defending a conscientious objector during World War II. In Parmelee v. United States (1940), Campbell was hired by the American Civil Liberties Union to challenge the federal obscenity laws over the banning of the importation of a book containing nude pictures. He prevailed in a 2-1 decision in the D.C Circuit. Always a great baseball fan, in Murphy v. Washington American League Base Ball Club, Inc. (1963), he represented the minority owners of the Washington Senators who unsuccessfully tried to prevent the team franchise from moving to Minneapolis – a collective loss for the city and a personal loss for Campbell.

Ed Campbell’s impact on the legal community extended beyond the courtroom. In 1938, he served on the Bar Committee that reviewed the proposed the new Federal Rules of Civil Procedure that greatly changed the practice of law in the federal courts. An ardent champion of civil rights his entire life, Campbell served on the Bar’s Civil Rights Committee with fellow lawyers Abe Fortas, Edward Bennett Williams, and Robert Bennett that opened the Bar Association of the District of Columbia to membership for African Americans. Along with his wife Elizabeth, Campbell was active in legal and civic efforts to desegregate public schools in Arlington, Virginia. In 1962, Campbell served as president of the Bar Association and later served as a delegate to the ABA House of Delegates.

In his oral history, Campbell recalls some of the more prominent judges before whom he appeared in his illustrious career, including Fred Vinson, Warren Burger, Thurman Arnold, Skelly Wright, and Barrett Prettyman. Campbell thought a great judge possessed an instinctive sense of right and wrong, was able to get to the heart of a case without prejudging the issues, was always courteous to lawyers, and was firm in running the courtroom and issuing decisions. Campbell also talks about the more interesting lawyers he litigated with and against, including Frank Hogan, who had a “vivid personality” and always wore pince-nez glasses, and Edward Bennett Williams, who was a “very brilliant lawyer” and had a photographic memory.

Ed Campbell’s oral history makes for engaging reading about some of the most interesting cases, judges, and lawyers in a fascinating and illustrious career that spanned almost seven decades.

Ed was born in Lexington, Virginia on March 12, 1899. He was admitted to the D.C. Bar in 1922. He has been in active practice of the law for a period of 65 years, longer than any Washington lawyer now living.

In 1964 the Bar Association of the District of Columbia presented Ed with its “Distinguished Lawyer Award” citation, which reads as follows:

“This certificate is presented to Edmund D. Campbell, Esquire this fifth day pf December 1964, by the Bar Association of the District of Columbia in recognition of his distinguished service as a member of the Bar and as a citizen of our community.

An able lawyer, who has served and organized Bar in many important capacities; a leader among men, who has given freely of his time to matters of transcendent public interest, both national and local; an individual whose devotion to the deepest principles of our society has consistently guided his own conduct and been an example to all within reach of his influence.

This distinguished man has exemplified through his entire life those qualities of mind and heart which have won our complete admiration, affection, and respect. The Bar Association of the District of Columbia does honor to itself by honoring Edmund D. Campbell, Esquire with this, its highest tribute.”

When he was 15 years of age, Ed entered Washington and Lee University, and graduated with top honors in 1918, the valedictorian of his class. When his stint in the Army ended following the signing of the Armistice in November, 1918, he continued his education at Harvard, where he obtained a Master of Arts degree in Economics.

He then returned to the Washington and Lee Law School from which he graduated first in this class in 1922. Shortly thereafter he came to Washington, D.C. and began the practice of law.

Ed remembers with interest meeting the legendary John W. Davis when the latter was a guest in his father’s home, and became acquainted with now Supreme Court Justice Lewis F. Powell, Jr. who was an occasional guest in this father’s home during his student years at Washington and Lee, around 1930.

During most of his career, Ed has been an active trial lawyer. The law firm with which Ed first became associated and which he soon became partner was Douglas, O’Bear and Campbell. With this firm he practiced until 1976, at which time the firm merged with another firm which is now known as Jackson & Campbell, P.C.

In 1952 Ed, a resident of Northern Virginia, became the democratic nominee for Congress in a newly formed Northern Virginia district. This was the year of the first Eisenhower landslide and Eisenhower carried Ed’s district by a plurality of 15,000. Ed lost to his republican opponent by approximately 200 votes.

In the second half of the 1950’s he and his wife, Elizabeth, were active in the civil rights movement in Virginia, then an unpopular cause. He successfully attacked the segregated seating laws of Virginia and in 1959 won a major legal victory on behalf of some 500 parents and students of the public schools in the City of Norfolk, which had been closed by gubernatorial edict under the Virginia “massive resistance” laws, following a court decision ordering the admission of Negros to those schools.  The court, in a landmark case, (James v. Almond, 170 F. Supp. 331, Appeal dismissed, 359 U.S. 1006), declared Virginia’s “massive resistance” laws unconstitutional, an action which resulted in the desegregation of the public schools throughout the state.

Perhaps Ed’s greatest legal victory came in the so-called “One man, one vote” cases in the Supreme Court of the United States in 1963, when Ed represented the Northern Virginia state legislators who had sued to have the court correct serious population imbalances in proportionate representation of legislative districts in the state.

Since early in his career, Ed has been active in services related to the legal profession. He was chairman of a committee which got the District of Columbia courts to approve standardized jury instructions in appropriate cases.

He was president of the Bar Association of the District of Columbia in 1962. He served on a special Committee which resulted in congressional legislation establishing the Superior Court of the District of Columbia, removing jurisdiction of local cases from the federal courts.  He served, by court appointment, on a special committee “For Court Excellence”.  He acted as counsel for a count appointed committee on judicial disability and tenure, a sort of watchdog committee for the courts.

In 1964, he was elected to membership in the ABA House of Delegates where he served for six years, before he was chosen member of the Association’s Board of Governors, at the “young” age of 73. As a result of this election he, of course, continued to serve in the House of Delegates until August 1977.

Following his tenure on the Board of Governors, he was for a period of two years, chairman of the Associations’s Committee on Communications.

Ed is a Fellow of the American College of Trial Lawyers. He served for several years as D.C. Chairman of the Fellows. He has been a director of the American Judicature Society.

At age 88 Ed remains at least semi-active in the practice of law and seems to enjoy it.

Ed and his wife, Elizabeth, have been married for 51 years. They have four children (two by prior marriage- Ed’s first wife died many years ago), eight grandchildren and two great-grandchildren.

Courtesy of the Campbell Family 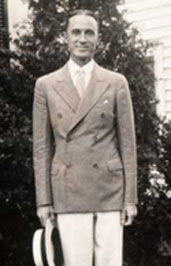 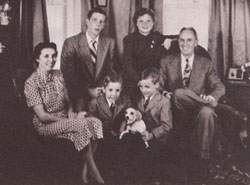 with his wife, Elizabeth Campbell, and their children, circa 1949 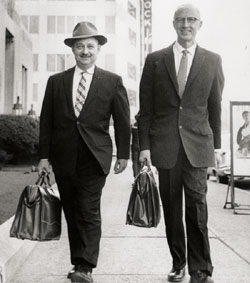