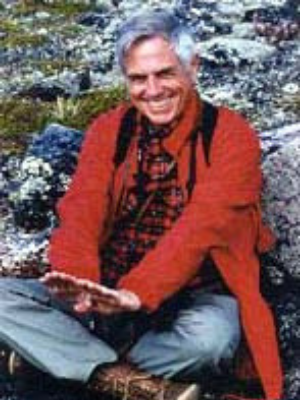 DISTINGUISHED SERVICE IN ALL THREE BRANCHES:

James L. Buckley may have come from a wider range of experience in the federal legislative and executive branches than any other federal judge in history, or at least recent history. He served in the United States Senate from 1971 to 1976 and as a high-level executive branch official from 1981 to 1985 before his appointment that year to the United States Court of Appeals for the District of Columbia Circuit, where he served until 1996.

Not to mention his wartime service in the Navy from 1943 to 1946 in the Pacific; his eight years as a private practitioner of law in New Haven and Washington, D.C., after graduating in 1949 from Yale Law School; and his 17 years working for a group of small oil exploration companies founded by his father. His wealth of diverse experiences make his oral history an especially interesting read.

Born in 1923, the fourth of 10 children, Buckley grew up in a small town in Connecticut. The efforts of William F. Buckley, his somewhat remote father, to find investors as well as oil overseas took the family to Europe for about three years while James was growing up. His father also “made sure we were exposed to just about every kind of activity  just in case one of them would catch our fancy,” Buckley recalled. “At one time or another I had lessons in  carpentry, model boat building, tap dancing, fly casting, horseback riding, and mandolin playing in addition to the more customary lessons in piano, golf, tennis, and ballroom dancing.” Buckley’s father also passed on his conservative political views to his children, including James and his younger brother William F. Buckley, Jr., who ended up founding National Review and becoming famous for his conservative politics and sharp wit.

As an “intensely shy” student at Yale College, James Buckley developed his closest friendships working on the highly competitive Yale Daily News, where he “enjoyed the work tremendously.” He graduated in 1943 and entered the Navy for the rest of World War II.

After the war – during which “I never felt in danger” even when sailing into combat zones – Buckley started law school at Columbia and switched to Yale (which had initially turned him down) after getting good enough grades to make the cut. He had some famous professors, including Eugene Rostow, who “taught me bad economics. . . . It was pure Keynes.” He ended up “in the absolute middle of my class,” graduating in 1949.

“I wanted to be a country lawyer,” Buckley said, maybe doing wills and estate planning, “but I didn’t become one.” Instead, he spent a few years doing “a little bit of everything” except litigation with law firms in New Haven and Washington, DC. Meanwhile, in 1953 Buckley married Ann Cooley. She had been working for the CIA, with Buckley’s sister Priscilla, but “never told me” what she did there, he recalled. They raised five sons and a daughter.

Buckley was wooed in 1957 by his father and an older brother to join the family business, which centered on oil exploration outside the United States, especially in Venezuela.

Asked how he got into politics, Buckley said: “You may have heard that I have an exotic brother.” In 1965, Bill Buckley, by then a famous conservative, ran for Mayor of New York as the Conservative Party’s nominee and prevailed on James to be his campaign manager. Bill was so sure he would lose that he told the media he would “demand a recount” if he won. But James found the campaign a fun experience because “Bill brought a wit and irreverence to the enterprise that captured the press corps” as well as “a serious and penetrating critique of the liberal approaches to urban ills.” The winner was John Lindsay,  a liberal Republican who was also a Yale classmate and “splendid” friend of James Buckley’s.

Three years later, in 1968, when Buckley was “flat on my back in an American military hospital in Libya” with a ruptured disc, Bill called again and asked him to consider running for the U.S. Senate in New York as the Conservative Party nominee against Jacob Javits, the liberal Republican incumbent. “I told Bill the idea was ridiculous,” Buckley recalls. He had never given a speech or been on TV. But he gave it a go after the Conservative Party leader assured him that “because I would have no chance whatever of winning, no one would expect me to spend much time campaigning.” While losing, however, he exceeded expectations by winning an “astonishing” 1.2 million votes

Buckley thought that would be the end of his political career. But his interest in politics was rekindled in 1969-1970 by “the campus violence, the anti-war protests, the bombings and flag burnings, the rejection of traditional standards, [and] rampant lawlessness that was being condoned by college presidents and the editorial boards of people like the New York Times.” Buckley decided to run for the Senate seat of liberal New York Republican Charles Goodell. He won the November 1970 election with just under 40 percent of the vote. “I got the traditionally Democratic, socially conservative, ethnic vote in New York – people who didn’t condone the burning of the American flag,” Buckley recalled.

As a senator, Buckley said, he took a special interest in working for “intelligent environmental regulation” that would “balance benefits against costs” and leave localized pollution to the states. He recalled the Senate as both more tumultuous and more fun than the executive branch and the bench. But the Senate was becoming less fun over time because of “the increasing difficulty of finding the time for serious legislative work.” The proliferation of federal statutes and regulations and legislative proposals had put such demands on senators that it had become “an impossible job,” with “less and less time in which to study, let alone master, the details of new legislation.” Indeed, he said, the Senate was no longer “a reflective place where people could examine and discuss matters in depth” – and the only way to change that would be for Congress to confine itself to matters that “cannot be handled effectively at the state or local level.” Then, he said, “you could close down three-quarters of the United States Government.”

Buckley lost his bid for reelection in 1976 election to Democrat Daniel Patrick Moynihan, in substantial part because he had opposed as a matter of principle any federal bailout of New York City, which was in a financial crisis because of what Buckley called gross mismanagement and overspending by the city government. His last political campaign was a losing bid in 1980 for a U.S. Senate seat in Connecticut. But at the same time, the election as president of Ronald Reagan, whom Buckley admired, brought him into the executive branch. In 1981 he was appointed Under Secretary of State for Security Assistance, which handled military aid to strategically located countries. That meant lots of travel. Then, in 1982, he became president of Radio Free Europe/Radio Liberty and spent three “very interesting” years at its Munich headquarters.

Buckley’s move to the judicial branch began with another phone call from his brother Bill, who “was asked to ask if I would be interested in being a circuit judge.” His first reaction was “that’s the most outrageous idea I had ever heard.” He had done no legal research in 30 years and had never done serious trial work. But conversations with experienced judges convinced him that he was qualified for the job. And Supreme Court Justice Potter Stewart advised: “Grab it.”

Buckley found life as an appellate judge stimulating but isolating.“One of the strange things about this job is that we almost never see one another,” he recalled.  “I can literally go three weeks without laying my eyes on another judge. . . . There are wonderful people here that I just don’t get to know as well as I would like.” He added that appellate judges “don’t have the occasion to bump into people casually, therefore, people tend to forget that you exist. Even people you are very fond of.” Beyond that, “I am just painfully slow at reading and writing, which is 99% of an appellate judge’s work.”

While expressing strongly conservative views on political and some judicial matters, Buckley said he did not think many of his votes or those of his colleagues were skewed by political ideology. “I think a lot of the law I am required to apply is awful, but I view my oath as requiring me to . . . come out with the result that the lawmaker intended,” he said. “I take my orders from the Supreme Court.”

Had he been free to reconsider broad areas of law, Buckley suggested, he would have had grave doubts about wisdom of the Warren Court’s use of the First Amendment to legalize pornography and ban school prayer, the Fourth Amendment exclusionary rule, and other liberal precedents. He also took a dim view of the constitutionality of expansive Supreme Court interpretations of the Commerce Clause and other matters that, he suggested, were reserved to the states by the Tenth Amendment. And he found the  administrative law Chevron doctrine “very troubling.”

As for his colleagues, Buckley recalled little raw political bias but rather a “different perception of reality that explains why, in a very small percentage of cases, politically conservative and liberal judges of equal intelligence and probity will come to different conclusions as to what the law requires.” Nor did he experience anything like the “legendary battles” between cliques of liberals and conservatives on the D.C. Circuit that were widely discussed in the 1970s. “These flare-ups are short-lived and have left no permanent bruises, at least, I am not aware of any,” he said. “I think that this is certainly a very different court than the one that existed in the sixties and seventies. That court had a reputation for activism, for plowing vast new legal ground. . . . Today, a majority of the judges were appointed by Judges Reagan or Bush, and that has had its effect.”

Buckley did lament, in terms resembling his complaint about the sheer volume of legislation he faced as a senator, that the appellate court’s workload was so heavy that  “the legal process has got to suffer from the sheer volume of cases we hear.” He added that, “I have always been a workaholic, but I have never put in more hours in any job in my life; I work most weekends and I get here at 8:15 in the morning, I leave here at 6:30 in the evening, and I usually put in an hour or two at home at night. On the other hand, there are three or four judges here who teach on the side, who do a fair amount of lecturing, who take off to Eastern Europe and help people establish judiciaries and so on.”

Buckley very much enjoyed the intellectual strengths and personal traits of his law clerks. “I try to get clerks who are significantly brighter than I am,” he said, adding that he also looked for “people who are agreeable as well as competent,” with what I call the ‘chuckle factor.’ ”

When not working and spending time with family, Buckley said, he loved watching birds, polar bears, and other wild creatures in their habitats. “I have always been fascinated by nature, particularly birds,” he said. As a child, “I would have odd pets – at one time or another, a crow, a cooper’s hawk, a flying squirrel, a woodchuck. . . . Since I have been on the court I have watched polar bears on three occasions. If you do something like this, you escape into a totally different world.”