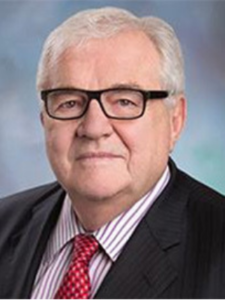 by Steven A. Steinbach
Based on Robert S. Bennett’s Oral History for the D.C. Circuit Historical Society


In a long, distinguished resume filled with many litigation highlights, one entry doubtless stands out: the representation of the President of the United States. Robert Bennett’s counsel was sought by President Bill Clinton in the lawsuit filed against him by Paula Jones. Despite the obviously unique, challenging, and public nature of the assignment, for Bennett the matter was fundamentally no different than any other. “I treated him like I would treat any other client in terms of a case. And I didn’t say, ‘Gee, this is the President, I have to treat him differently.’ I did not treat him differently – [except] I began every conversation with ‘Mr. President.’” Still, for Bennett, “[i]t was very exciting. I’d have to pinch myself sometimes. Not bad for a kid from Brooklyn.”

In the course of his representation, Bennett appeared before the Supreme Court on behalf of Clinton, urging the Justices to defer proceedings in the civil lawsuit against the president until the completion of his term in office. Bennett came away from the oral argument “well pleased,” convinced that things had gone “very, very well.” Indeed, “I thought it would be nine-nothing.” Of course, the decision in Clinton v. Jones was unanimous – but against the president, as the Court concluded (perhaps infamously) that a president’s active participation in civil litigation would not unduly distract from performance of his official duties. But says Bennett: “I believe that they made a fundamental mistake. I believe they really believed that this would not seriously interfere with the conduct of the Presidency. . . . That was just wrong.”

Bennett was brought into the Clinton proceedings in part to handle media relations. Serving as a spokesperson for the president on a variety of legal issues “placed enormous pressure and stress on me because, if you say something and it’s not quite right, there are immediate consequences to the President.” As Bennett observes, “It’s always best in your cases if you never have to talk to the press. That’s my ideal, but when you represent the President, that is just impossible. . . . You can say ‘No comment’ in lots of cases, but you can’t when you are representing the President of the United States.”

President Clinton was far from the only prominent client who sought legal advice and assistance from Bennett. Over the course of his storied career, Bennett has represented Congressman Dan Rostenkowski, Washington sage and superlawyer Clark Clifford, and Secretary of Defense Caspar Weinberger (“the most outrageous prosecution I’ve ever been involved with”), among other public figures, along with the Catholic Church and the U.S. Olympic Committee. He also served as special counsel to the United States Senate in its ethics investigation of several senators regarding their role in the Charles Keating financial scandal.

In his oral history, taken for the D.C. Circuit Historical Society by David E. Birenbaum, Bennett traces his path from a boyhood in Brooklyn – to college and law school at Georgetown (where he worked, on the side, for legendary attorney and FDR advisor Tommy “The Cork” Corcoran) – to the United States Attorney’s Office in Washington (“some of the greatest years of my life”) – to private practice. What explains Bennett’s extraordinary career? “I work hard. I have had a lot of great lawyers helping me, and I have been very lucky. . . . If I can make it, lots of people can make it.”

Robert S. Bennett (Senior Counsel, Schertler & Onorato, LLP) is a former federal prosecutor and a leading member of the defense bar. Mr. Bennett is renowned in his field as an exceptional trial lawyer who has handled numerous high profile cases and has represented corporations and individuals, including corporate directors and officers, in criminal, civil, SEC enforcement, and congressional matters. Mr. Bennett has been listed repeatedly in various publications as one of the nation’s most influential and successful litigators.

Mr. Bennett has co-chaired several American Bar Association National Institute programs on the defense of corporations and their officers in parallel grand jury and administrative agency investigations. He has written and lectured on complex criminal and civil matters, and crisis management issues. He also is a fellow in the American College of Trial Lawyers, an elite organization of the country’s leading trial lawyers.