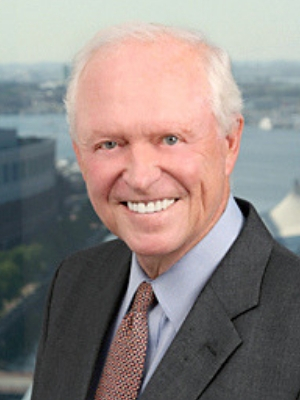 by Patricia Shakow
Based on Benjamin Civiletti’s Oral History for the D.C. Circuit Historical Society


Many Washington lawyers will know former Attorney General Benjamin Civiletti personally because he has lived and worked in this area for his entire career. Born in Peekskill, New York and raised in the Midwest, he came to Baltimore to attend Johns Hopkins University as an undergraduate in 1954.

And though he initially enrolled in law school at Columbia, he transferred after his first year to return to Baltimore and finish his education at the University of Maryland Law School. After clerking for U.S. District Court Judge Calvin Chestnut, he began the kind of career familiar to attorneys here, shifting from private practice to government service, and he excelled in both areas.

Rejecting the advice of an uncle who told him to specialize in trusts and estates because there was less pressure and the hours were better – the same advice given to female law students in my day – he was determined to be a litigator in the area of criminal law, a combination that ensured both stress and long hours. In the United States Attorney’s Office in Baltimore, he was in his element handling a variety of cases.

Later, he joined the Venable firm in Baltimore, where he practiced before and after his service in the Justice Department, primarily representing large corporations in criminal matters.

If you’d like to learn how one is chosen for a high post in the Carter Administration without having any political connections, read on, for that is Mr. Civiletti’s story. Serving first as Assistant Attorney General in the Criminal Division, then Deputy AG under Griffin Bell, he rose to the top job when Mr. Bell resigned half way through his term.

And if you remember, or simply want to learn about any of the following matters in which the young Attorney General was involved, read on: ABSCAM, COINTELPRO, Koreagate, Billy Carter and Bert Lance, Hamilton Jordan and the first independent counsel investigation, the Greylord scandal involving corrupt Chicago judges, the Mariel boat lift from Cuba, the Patty Hearst and Puerto Rican terrorist commutations, and the American hostages in Iran. In the last case, Mr. Civiletti became the first, and to my knowledge the only, Attorney General to argue before the International Court of Justice on behalf of the hostages. Finally, don’t miss the case of the Law Enforcement Assistance Administration and the shooting shoe.

Ben is both a trial and appellate advocate. In addition, he developed a practice in alternative dispute resolution, working successfully as a mediator, facilitator, master and arbitrator in many commercial and tort disputes to achieve faster and more cost-efficient justice.

Ben’s prior service on four public for-profit boards and three non-profit boards afforded him a thorough familiarity with corporate governance consensus, task forces, and strategic planning. As Attorney General of the United States, Ben argued before the International Court of Justice on behalf of the American captives in Iran, and before the Supreme Court for the right of the government to denaturalize Nazi war criminals, and successfully defended the President’s wage and price guidelines in the Court of Appeals for the District of Columbia Circuit (sitting en banc).

Furthermore, Ben was responsible for the Justice Department’s promulgation of open trial guidelines, the Stanford Daily laws, the development and publication of National Priorities for the Investigation and Prosecution of White-Collar Crime, Principles of Federal Prosecution, National Prison Standards, and a score of other improvements in the effective enforcement of criminal law and in civil rights and environmental protection.

Ben successfully argued again in the Court of Appeals of Maryland to reverse excessive millions in punitive damages and the court entered judgment for the defendant. He was co-independent counsel, appointed by regulators, in the investigation of the derivative business of a major Wall Street financial institution.

Ben represented a corporate client in the successful defense of multi-million dollar claims of tortious interference with contract. For another client, he successfully settled multiple intentional tort claims after a lengthy trial on motions to suppress. And he again was successful in settling claims from a domestic air crash in which he represented plaintiffs against a major airline.

Ben served as a member of the National Research Council Committee to Study National Cryptography Policy and as Chair of the Maryland Governor’s Commission on Welfare Policy. He was a member of the Governor’s Task Force on Alternatives to Incarceration. In community-related areas, Ben’s service includes former membership on the Legal Aid Bureau, Inc.’s board and Chair of GBMC Healthcare, Inc. (retired).

In the legal publications field, he was a member of the Lexis-Nexis/Martindale-Hubbell Legal Advisory Board and a member of Matthew Bender & Company, Inc., – board of editors of Federal Litigation Guide Reporter. Ben also served as chair or member on a number of task forces under several Maryland governors. These include: Funding of Public Education; Drug Abuse; and Funding of the Arts.