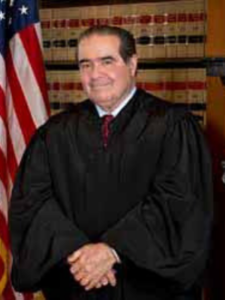 By Steven A. Steinbach
Based on Antonin Scalia’s Oral History for the D.C. Circuit Historical Society

In late 1992, six years into his tenure on the Supreme Court, Antonin Scalia sat for an oral history interview with his good friend, Judith Richards Hope.* Sadly, the oral history never proceeded beyond this first session. But even in only twenty-plus pages, the reader is rewarded with a fascinating glimpse into the origins of the man who became Justice Scalia: his childhood and family roots; his schooling; his early career; his interests and passions; and, at all times, his gregarious personality.

“Nino” grew up in New Jersey and Long Island. His father was an immigrant from Sicily who worked briefly and unsuccessfully in the newspaper business before becoming a teacher of romance languages. His American-born mother, also of Italian heritage, might have lacked his father’s scholarly nature, but she played the dominant role in his upbringing: she “carefully plotted for me the course.”

Scalia attended a Jesuit high school, where he studied logic and was drilled in classical languages. He had his heart set on attending Princeton – only to be rejected because, in his view, he wasn’t “WASPish enough.” “I must say that’s the only time I have ever had the feeling that, you know, that being an Italian-American made any difference to my detriment in my life.”

After Georgetown – although he was never “dying to be a lawyer” – Scalia proceeded to Harvard Law School. At the time, HLS was an excessively competitive place: students would “go to sleep with their lights on just to panic their classmates into thinking they were studying late into the night.” Scalia found himself working incredibly hard: “I cannot say that I look back with misty-eyed mellow reflection upon my years at Harvard Law School.” (By the way, what does Scalia think of all the “Law and ______” policy courses offered nowadays at law schools? “Not much.”)

How did Justice Scalia meet his wife, Maureen? By his own account, just barely. In his last year of law school, he was introduced to her in December, but then was too busy with law review to see her again until late January. By March they were engaged, and they married in September. He credits his wife with “everything” relating to his family: “Our family joke is that I take care of the Constitution and she takes care of everything else.” The couple raised nine children – quite a change for Antonin himself, who grew up not only an only child, but also an only grandchild (he had no cousins). At the time of his oral history interview in 1992, Justice Scalia still had two teenagers living at home. But, in his words, “You know, just having two doesn’t really seem like – well, it’s hardly worth the trouble.”

After finishing at HLS, he and Maureen traveled in Europe on a one-year non-academic fellowship. Scalia has vivid memories of being in Germany during the Cuban Missile Crisis – and then of visiting Poland during the depth of the Cold War.

Returning home, he joined Jones Day in Cleveland, where he practiced for almost seven years, handling a wide array of matters, including for his own clients. Subsequently he moved into teaching (at Virginia, Georgetown, and Chicago Law Schools), interspersed with government service: at the Civil Service Commission; as General Counsel of the new Office of Telecommunications Policy; as chair of the Administrative Conference of the United States; and finally as head of the Office of Legal Counsel (although nominated by President Nixon, his DOJ service ended up being entirely during the Ford administration). Scalia describes with pride his service under Attorney General Edward H. Levi, who restored to the Justice Department “a feeling of integrity” that had been lost during the Watergate years.

All wonderfully interesting stuff. And along the way, a reader of Justice Scalia’s oral history learns about his passions for piano and poker, for basketball and tennis and weight lifting – and, crucially, the distinction between “Queens stickball” and “Brooklyn stickball.”