A Summary of the Oral History of Judge Harold Greene 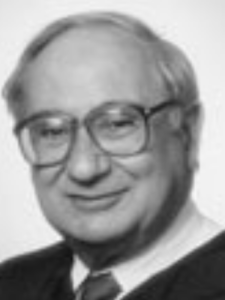 It is not the norm for one individual to be considered the architect of an entire area of law, but such is the undisputed legacy of Judge Harold H. Greene – the “father” of modern telecommunications law.  Judge Greene’s oral history reveals his actions and attitudes in presiding over the famous breakup of AT&T.  But even beyond that momentous episode, Judge Greene had a lifetime of rich experiences:  escaping from Nazi-held Poland during World War II (which included walking across the Pyrenees); serving in the Justice Department during the 1960s, where he helped author both the Civil Rights Act and the Voting Rights Act; becoming the first Chief Judge of D.C. Superior Court; and then, eventually, serving as a federal judge – where, in addition to the AT&T case, he presided over one of the Iran/Contra trials and declared the Sentencing Guidelines to be unconstitutional.  His oral history is summarized by Stephen J. Pollak, the Chair of the Historical Society.