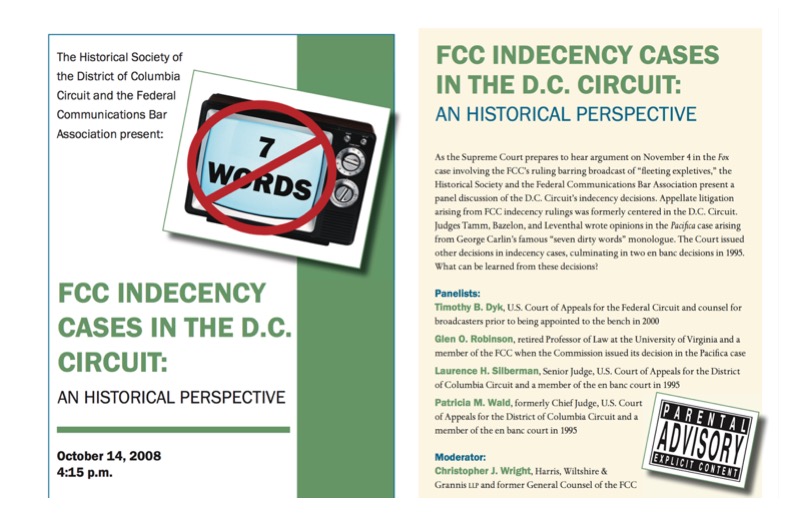 The Hon. Patricia M. Wald, Hon. Timothy B. Dyk and Hon. Glen O. Robinson discussed the FCC indecency cases heard in the D.C. Circuit in a wide-ranging panel discussion on October 14, 2008. The panel was moderated by Christopher J. Wright, Esq.

Mr. Wright, who previously served as General Counsel of the FCC and argued the Action for Children’s Television case before the en banc D.C. Circuit in 1994, provided an overview of the FCC’s indecency jurisprudence.

Professor Robinson from the University of Virginia was an FCC Commissioner in 1975 when the Commission issued its decision in the Pacifica case arising from the late George Carlin’s famous “seven dirty words” monologue.

Professor Robinson described the Commission’s decision holding that Carlin’s monologue was not suitable for broadcast and his own concurring statement which emphasized his conclusion that indecent language is a “nuisance” when broadcast at times when a large number of children are likely to be in the audience.

Judge Dyk of the Federal Circuit, who represented broadcasters in numerous indecency cases before taking the bench in 2000, provided perspective on the FCC’s regulation of broadcasters in the 1970s through the 1990s.

Judge Wald, who served on the D.C. Circuit from 1979 to 1999, addressed the lengthy litigation culminating in Action for Children’s Television, in which the en banc court upheld the 6 a.m. to 10 p.m. ban on indecent broadcasting.

Judge Wald also described the en banc decision concerning indecency on cable channels that was heard by the en banc court on the same day as the broadcast case, and noted how indecency is now regulated very differently depending on whether it is on a broadcast channel or a cable channel, even though only 14% of households now obtain free over-the-air signals.

A lively question-and-answer period included discussion of whether counsel in the upcoming Supreme Court case involving the FCC’s decision to ban “fleeting expletives,” FCC v. Fox Broadcasting, should use those expletives in oral argument.