President Harry Truman used a silver trowel when he laid the cornerstone for the Prettyman Courthouse in 1950. Since Truman was a member of the Masons, he probably thought laying the cornerstone was ironic, but even more ironic is the fact that the site was once occupied by the Masons’ Jackson Hall. That building was named in tribute to another Masonic President, Andrew Jackson. The history of the building and the site, stretching back to when it was patented to Albert Pinner of Maryland in 1666, is meticulously recounted on the website of the United States District Court for the District of Columbia, which has kindly consented to the DC Circuit Historical Society posting a link. 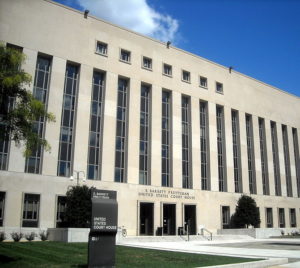