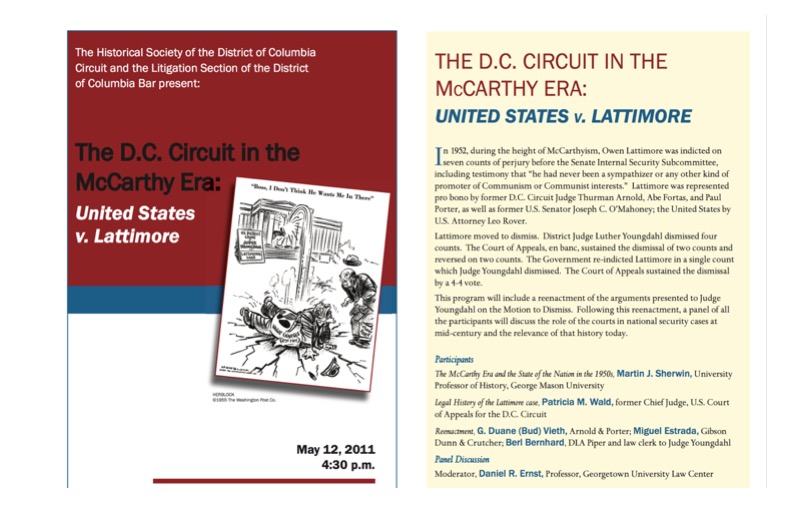 A ruling in the mid 1950’s by a federal judge in the D.C. Circuit almost single-handedly started turning the judicial tide against the “red scare” generated by Senator Joseph McCarthy and others, according to a panel presented by the Historical Society of the D.C. Circuit in May 2011.

District Judge Luther Youngdahl rejected government efforts to try Asia scholar Owen Lattimore for perjury in denying he had been a “promoter of Communist interests,” saying the charge violated both the First and Sixth Amendments because “it restricts the freedom of belief and expression” and fails “to inform [the accused] of the nature and cause of the accusation against him.” The Court of Appeals ultimately sustained the dismissal in a 4-4 vote.

In a reenactment of the argument on a motion to dismiss the indictment, Arnold & Porter attorney G. Duane (Bud) Vieth represented Lattimore. Miguel Estrada of Gibson, Dunn & Crutcher argued for the government. DLA Piper attorney Berl Bernhard, who clerked for Judge Youngdahl, portrayed the judge.

Lattimore was raised in China where his parents taught English. He was editor of the journal Pacific Affairs and an advisor to Chinese leader Chiang Kai-Shek. After China fell to the Communists, Lattimore was among those accused of aiding the Communists.

Lattimore endured 13 acrimonious days of testifying before the Senate Internal Security Subcommittee and was subsequently indicted on seven counts of perjury. Lattimore was represented pro bono by former D.C. Circuit Judge Thurman Arnold, Abe Fortas, and Paul Porter, among others.

The program can be viewed below and is available from the Society in the DVD format.