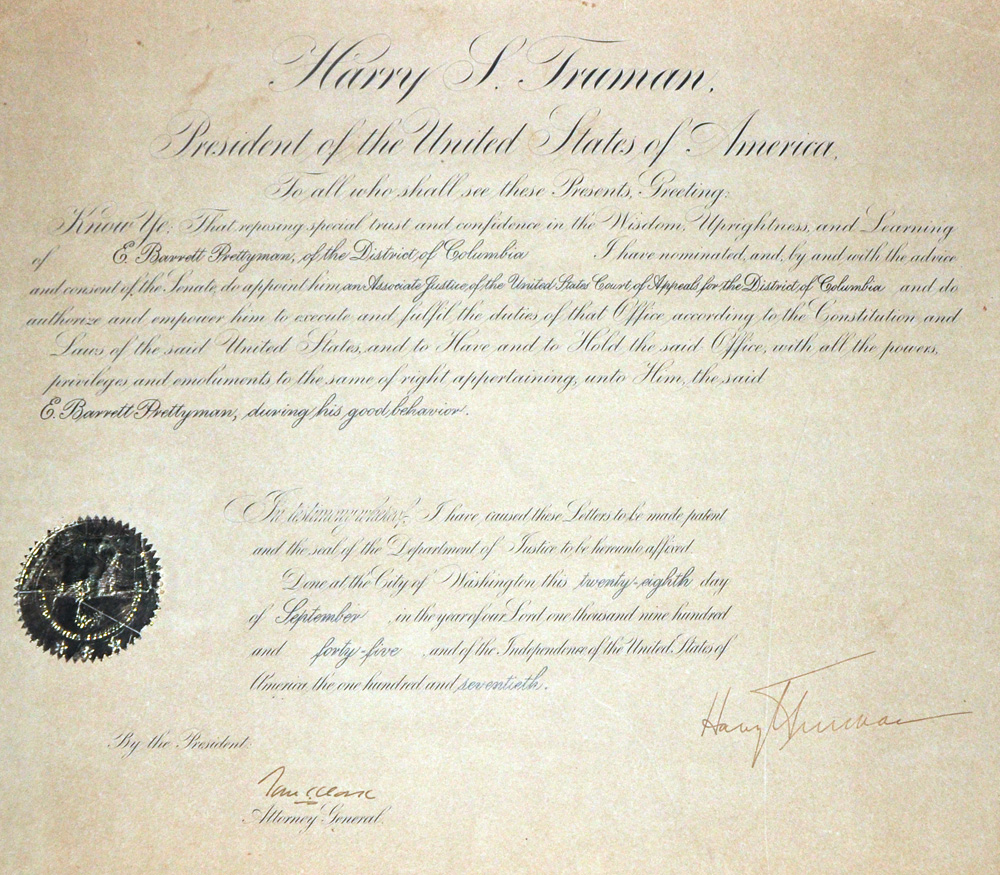 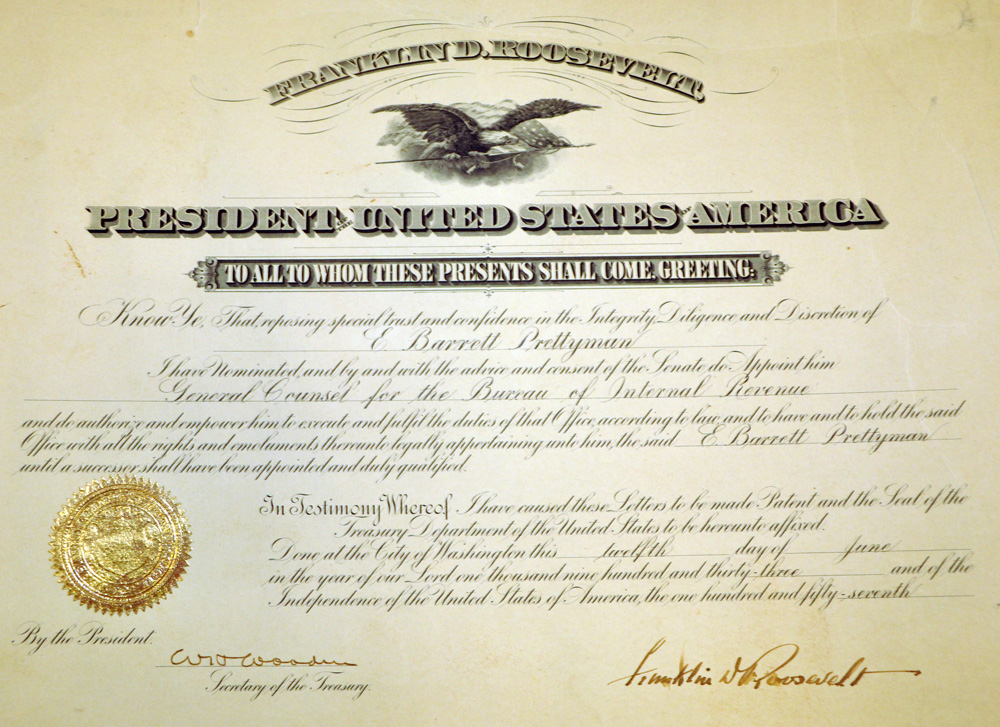 Thirty-one year old Robert Martin of Little Elm, Texas, doesn’t remember what he paid for them. As a teenager, he bought two presidential documents at a thrift shop near Houston that no one else seemed to want – one bearing the signature of Franklin Roosevelt and the other, of Harry Truman.

Those documents were the 1933 commission appointing E. Barrett Prettyman to be General Counsel of the Department of Internal Revenue and Prettyman’s 1945 appointment to the U.S. Court of Appeals for the District of Columbia Circuit. Martin, a senior associate with Crowdverb, a digital communications and grassroots mobilization company, has donated the documents to the Historical Society.

But how did the documents come to be in a box so far from Washington? Prettyman’s son, E. Barrett Prettyman, Jr., of Hogan Lovells, says he doesn’t know. Neither does Martin, the man who bought them.

Martin sent the following recollection, along with the documents: “As a collector of historic memorabilia from a young age, I’ve long had a fascination with the documents that, though merely paper and ink, have shifted the course of our nation and the lives of its citizens. Thus at the age of 16 or 17, I found myself standing next to a folding table in a small, nearly empty charity thrift shop in the suburbs of Houston waiting for a silent auction to end. The auction had been advertised in a local paper as part of the shop’s grand opening. Up for sale, sitting next to an antique teddy bear and a few unmemorable items, were two official commissions signed by Presidents Franklin Roosevelt and Harry Truman. One appointed E. Barrett Prettyman, a name unknown to me at the time, as General Counsel for the Bureau of Internal Revenue (today’s IRS) while the other gave him a seat on the U.S. Court of Appeals for the D.C. Circuit. The shop’s staff said they had found the commissions at the bottom of a box. When the auction ended at five-o-clock, I was the only bidder. I gladly handed over a portion of my teenage savings and brought the documents home.

“Most significant to me at the time were the presidential signatures found at the bottom right-hand corner of each commission. FDR’s was signed with the India ink he was known for using and both signatures came just months after each man had assumed the Presidency. Once I moved to Washington, however, the significance of Judge Prettyman and the courthouse bearing his name quickly became evident as well. The court has of course produced Supreme Court Justices and its decisions have impacted various facets of our nation and its path moving forward. Judge Prettyman’s influence on the court and many of those decisions is unquestioned. The Prettyman Courthouse itself became a familiar sight as, for several years, I often drove past it on my way to work at the White House, where I was privileged to edit documents for another President’s signature. I also saw firsthand the confirmation process for judicial nominees, from their nomination to Senate approval. These documents from the past were with me to serve as a link to what I was witnessing in the present.

“While I’m glad to have been a caretaker for these important commissions, they are now returning to their true home where they can help tell the story that is being preserved by the Historical Society of the D.C. Circuit.”