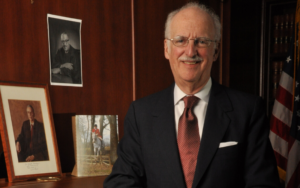 “One of the most significant intellectual forces on the federal bench during the last three decades.” Judge Douglas Ginsburg is so described by Washington attorney Daniel Marcus, who conducted and here summarizes Judge Ginsburg’s oral history. In the oral history, the Judge not only describes the most significant cases he has decided over his thirty-plus years, but also recounts his path to the federal bench, via academia (at Harvard Law School,

specializing in antitrust) and service in the Reagan administration (at DOJ and OMB, focusing on regulatory reform and antitrust policy). Not the least of his significant judicial accomplishments:  Judge Ginsburg, while serving as Chief Judge for the D.C. Circuit, presided over the construction of the new wing of the federal courthouse.