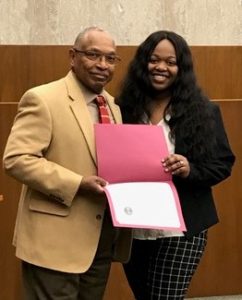 One hundred high school students from Maret, McKinley Tech, School Without Walls, and H.D.Woodson came to federal court on March 1, where each argued a 1st or 4th Amendment case before a federal judge. Chief Judge Garland welcomed the students in the ceremonial courtroom, after which they proceeded to individual courtrooms for their arguments. The judges (Judge Srinivasan, Chief Judge Howell, and Judges Contreras, Cooper, Moss, Walton, Rothstein, and Bryson, and Magistrate Judges Robinson and Harvey) were unanimous in their praise of the students’ arguments, preparation, and knowledge of the subject matter.

Applauded also were the 30 attorney volunteers who mentored the students over the one-month period preceding their day in court, the teachers who assisted along the way, Chief Judge Howell,Judge K. Jackson and Executive Director Linda Ferren for their considerable organizational support, and Society Vice President, Jim Rocap, who orchestrated the Society’s 14th Annual Mock Court Program.

Photos of the Mock Court program and the names of outstanding student advocates appear on this site.